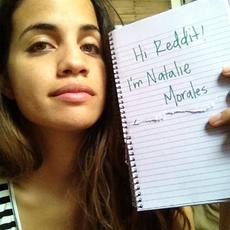 About
starred in the ABC Family television series The Middleman, and had a recurring role on the first season of the USA Network series, White Collar. In 2010, she appeared in the feature films, Wall Street: Money Never Sleeps, and Going the Distance.
Reddit AMA Stats
Tag Cloud
actress

Hi, I'm Natalie Morales. You may remember me from such tv shows as The Newsroom, Parks & Rec, White Collar and most importantly, The Middleman. AMA!

Hi, I am Natalie Morales, and I'm going to be (mostly) naked on broadcast television tomorrow night. AMA!

Good question. I had a lot of thoughts on that episode. I felt very weird about that day, and reliving it was even weirder. It didn't feel right to me to celebrate. It felt more like a solemn occasion and not a big party, and it made me kind of nauseated to just see cheerleaders doing flips in front of the white house and big frat parties happening cause we killed a guy. A really, really bad guy, sure. But you are celebrating the death of a person. That was just my reaction. It may not be the right one, and I thankfully didn't know anyone affected by 9/11, so I don't judge anyone's feelings or reactions to it, but I was glad to be the one character in this show who wasn't thrilled. That would have been hard for me to play.

Hot Karl, can you describe the ideal Queen Bey to your Jewish Hova?

hmm. parks & rec has pretty damn good food. Aziz likes pb&js but he likes them "zz style" which means no crust and cut down the middle. it's pretty dang adorable.

yes, yes i did know this.