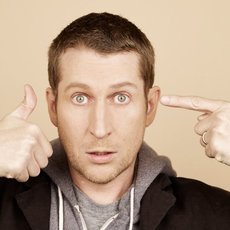 About
is an American writer, actor, comedian, television personality, director, producer, and podcast host. In the mid-1990s, Aukerman was a writer and performer on Mr. Show with Bob and David.
Reddit AMA Stats
Tag Cloud
comedian, writer, actor, podcast

Having sex with girls, I think?

why, thank you! what a polite young person you are.

Each season has had its difficulties in producing them - and let me just say that I am really proud of the episodes in the second half of season three. I think they're super funny. There is a story to why I think they're a little inconsistent in production:

For season two, we wrote all 20 episodes before we started shooting, and we shot them all out of sequence. I think the christmas episode with Zach was one of the first ones we shot, and I know the Halloween ep with Pee-wee was in our second week. So we really got to figure out an order after the fact that made sense.

For season three, we had an earlier premiere date, but we started at the same time. So, even though we still wrote everything before we started shooting, what I didn't know was that the first ten episodes we turned in (and the first ten we shot) had to be the first ten that aired. The network told us that after we shot them. Those ten were huge episodes - and ones I would have spaced out a bit, because in most of them we're doing big, big ideas.

I pushed back, and we were able to keep some great stuff, like the time travel episode and the Xmas ep, but I do think the back half of the season suffers a bit from being less ambitious in scope compared to the front half. I would have liked to have mixed them up a bit more, like a mix CD, and have there be more variety.

People don't want to ever answer this question - but I'll give you the straight answer: $67,035 a year (after taxes)

yes, but how long do Wookies live?

old don draper in 2015, looking at an iPhone, tipping his shades down - "I could get used to this."

this is a great rule!!! Seven wars in the stars!

Someone at HBO told me they were a UTU2TM fan, so I told Adam we should do a TV show there. He said it would be like "Tell Me You Love Me," but with more fucking.

I am currently reading almost everything I can - loving Spider-Man and Silver Surfer by Slott; bummed Fables is coming to an end; stuff by Jason Aaron is great, just read Ant-Man by Nick Spencer right before this started, and it really had that Superior Foes of Spider-Man feel. Currently re-reading Hickman's FF, which is so complex and well-thought-out, it frightens me from ever attempting something similar.