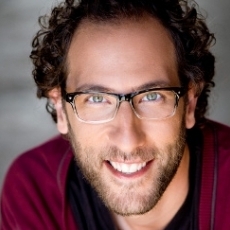 IamA host of Comedy Central's "This Is Not Happening," Ari Shaffir, ask me and my friends anything…

I am comedian Ari Shaffir, ask me anything.

I am Comedian Ari Shaffir AMA

3) I am a standup comedian named Ari Shaffir. I have a double special out on Netflix called "Double Negative." Get it? Because it's 2 specials and also because it makes a positive? You get it. Ask me anything.

What's the difference between pumpkin pie and pussy? That's actually a thing they used to do at some open mic I used to do when I started. It was at a coffee shop in the Valley on Lankershim called Kindness of Strangers. It's not open any more.

Like, "The difference between pumpkin pie and pussy is, I've never eaten my mother's pumpkin pie, wiped my mouth and said "More, please.""

It was pretty fun. And I guess the more established open micer comics in the crowd could preemptively start it up by saying "Pumpkin pie."

That would put the onus on the guy on stage to repeat, "Pumpkin pie? Did someone say pumpkin pie? What's the difference between pumpking pie and pussy?" and they'd go from there.

Years later I found out the whole game was stolen from one of the Kings of Comedy guys and I felt like a part of my innocence drank too much and had to vomit.

Thanks! I'm glad you liked my special!

One time I waited for a year after my friend ratted on me. Waited till he thought I had long since forgot about it. And then we took a trip to San Diego. Super fun couple of days. And then I left him there. Drove back to LA on my own and left him a note that said "rat" on the outside. On the inside was a photocopy of the letter he had written ratting me out a year before. #neverforget

I'm sure it will. Everyone who works for that bureaucracy will eventually be tempted to abuse their privileges when they realize how nearly impossible it is to lose their jobs.

The correct grammar is, "With how many prostitutes have you had sex?" The answer is; two.

Then you should do them.

This is all on film on a Naughty Show podcast from the old Deathsquad studio at Redban's apartment. It's on Deathsquad.tv.

What happened was, I took a hit of salvia but I didn't quite take a big enough hit or I didn't hold it long enough. So it took me right to the edge of disappearing into my mind, but didn't quite get me through the barrier. So I took another hit. This time, the hit was as big as I could physically muster. It was massive. And I held it for a really long time. That hit alone would have been enough to make me obliterate my consciousness. But that hit, coupled with the one from before that got me ALMOST there put me in another place.

I was in a lake in the backyard of my childhood home. But I wasn't me swimming there. I was a new being, who lived under the water. It took me a little bit of time to learn how to breath water but then I learned. And I was there for a while. I mean, like, months. At least. I estimate I was there anywhere from 4 months to 2 years. I made friends. I had a life. All underwater.

At some point in my new life, I saw Sam Tripoli at the shore of the lake so I swam up to him to investigate (he was just sitting in the chair across from me in reality). That's when they started pulling me back into this existence. But what they didn't know was that I couldn't breath air any more. I had forgotten how after breathing underwater for so long.

I had to relearn the experience of breathing.

Man, that was a good trip. It looked hellish if you watch the video but what's important to understand is that the hellish part was me not wanting to leave my friends, family and life in the lake. It was just adjusting back to this reality that hurt. But the months or years I was living there were some of the most beautiful and peaceful of my life.

It's kind of like that Star Trek movie where Kirk is still alive and he had been in some dimension where all your dreams come true for all moments of every day and you live outside time. And then Picard came and got him out of there and he couldn't stand to live in the world for a while. But it wasn't that bad for me.

I posted it on twitter hours ago. Good job. DM me your paypal and I'll send you $20.