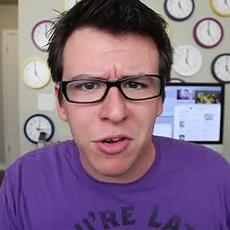 IAMA Professional YouTuber. Whatever that means... AMA is you'd like

A beautiful bastard named James, gave my father a kidney. This was after hundreds of people applied to get checked to see if they were a match for a transplant. I was emotionally blown away, and am still thankful and shocked to this day that people cared enough to help.

If you don't know my story, my father and I both have PKD, which slowly kills our kidneys. One day I'll have to be on dialysis and/or get a transplant as well.

Most backlash comes from people who are one-and-doners. People who tune into one episode and just shout LEFTY SJW CUCK or NAZI RIGHT WING RACIST!

Example: There are people who are classic feminists and I love and respect them. They believe in equality of men and women and are down for conversations to get us to a point of understanding, BUT there are people in that same group who are toxic, regressive, and guilty of the things they say they are against. So when I make a video where I am very critical of a person like the one I just described, and I get called a woman hater by someone just tuning in.

If I criticize Trump, there are people who watch me that know I would and have done the same exact thing to Obama or Hillary, but for someone tuning in for the first time, sometimes they toss my opinion to the side because they think I'm a Republican hating super liberal.

Opinions aren't always the best for business, but I love the conversation too much to stop sharing mine and listening to yours. I know that I'll keep the audience and people I want, and shed those that can't deal with that.

Difficult emotionally- Anything that involves children. Becoming a father made me much more empathetic to others, but it also made me more of an emotional rage monster when it comes to anyone who hurts kids. As someone who prides himself of being unbiased its hard to maintain that when it comes to a pedophile/abuser. If there was a way to sign up, I would sign up to personally curbstomp child abusers.

Difficult to report on: It was a challenge to cover the election this year. People hate each other for political beliefs all the time, but this year was next level. The episodes I did after Trump won were very challenging, because emotions on both sides were peaking. I had people in my office literally crying because Hillary lost, and heard from friends of similar experiences in their work places. There was a lot of gloating online from some Trump supporters. If you just peeked at facebook/text chains, people were blowing up their relationships left and right because of the election. But it also gave me an opportunity to be someone who tried to unite those on the left, right, and moderate. I feel like I've done a pretty good job of that.

I've expressed this to both Tmartn, Tom, and other major players who don't properly explain that what they are putting out is a paid sponsorship or something they will profit from: IF YOU AREN'T UPFRONT ABOUT YOUR SPONSORSHIPS, YOU ARE LYING TO YOUR AUDIENCE AND YOU'RE BEING A DIRTY SHADY CUNT.

As far as accountability there is more and more these days. Will there ever be a perfect system...probably not. Will people still abuse it and try to sneak sponsorships, yes. The more mainstream Youtube becomes, the more governments have become aware and stepped in. I'm not a big believer in government restrictions, but when it comes to people being shady and lying to their audiences, I think those people need to be held accountable/penalized.

There are a few things in the way right now. Current legal/contract obligations and to do what I REALLY REALLY want to do, I will need full creative control, investment AND it has to be money from someone that doesn't want to control the "angle" of the network. Someone who just believes in me and what I want to do.

There are more independents and moderates than ever. Everyone goes left or right because often emotions control views, but I want to showcase what both sides are saying and let people come to their own conclusions.

Whats nice about my audience is that for the most part everyone is really nice and respectful. No one has ever threatened/harassed me IN PERSON or done anything negative on purpose when they meet me. Worst case, you have someone who is just very very excited and isn't equipped for that social situation, so they shut down or get a little bit weird/have no sense of personal space/get a little stalky at events like Vidcon. I'm a weird awkward anxious person, but I have years of faking being a socializing normie though, so I am as helpful/respectful as possible.

I attribute this to my audience being a bit older and mentally mature compared to many other youtube audiences/fandoms. Also that when I share my opinions most know I open to a conversation or debate on the topic and don't think of myself as infallible.

I want there to be a God, but I don't believe there is one. I'd actually be horrified if there was one. A God that would allow childhood cancer, Alzheimer's disease, natural disasters like the earthquake/tsunami that killed around 240,000 people back in 2004 is no friend of mine. And thats without jumping into the horrors of things like war and genocide where men are pulling the strings. You can say its a challenge/test, but thats a pretty demented test. Thats the way you play a twisted game of Sim City you are bored with, not people.

BUT, before you run off. Hear me out.

I have no issue with religion as long as it doesn't take away someones rights. As long as you aren't preaching about someone being lesser, just because of the way they were born. As long as its about the love your family, love your neighbor, put more good in the world stuff, I am fine with it. Even though I don't believe I'll let my children know what other people believe. I'll recommend reading the books of many faiths, because being informed is always a good thing. If they want to test the waters, I'll go to church with them.

As far as the future, organized religion isn't going anywhere right now. I think believing in something larger than yourself is comforting, and can also be very important.

No, but I really wish your hand hadn't been so sticky...

Gary Vaynerchuck's DailyVee and Joe Rogan's video podcast the most these days.

Also a big fan of TLDToday, Marques Brown, The Rubin Report and thats where I'm going to end the list because it'll turn into me just listing all my subscriptions.