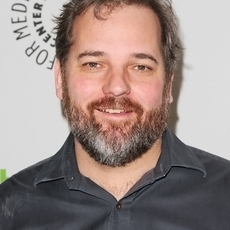 About
creator and former executive producer for the NBC television comedy series Community, and, along with Rob Schrab, a founder of the alternative television network/website Channel 101.
Reddit AMA Stats
Tag Cloud
writer, performer

I am Dan Harmon, creator of Community, writer of Monster House, and Executive Producer of the upcoming Charlie Kaufman Stop Motion Animated feature Anomalisa, ask me anything!

I'm Dan Harmon. Executive producer and star of Seeso's HarmonQuest. Ask Me Anything.

Q: "Dan, it seems like people tend to assume you're sexist because you don't shower and have that oppositional defiant disorder edginess that often comes with closet chauvinism among comedy writers, but is it true you're, like, super pro-actively invested in the obliteration of the entertainment industry's glass ceiling?"

A: I'm glad you asked that, Kevin, but you see, even with that question, we're already slipping into progress' biggest impedance within the male worldview which is the unspoken characterization of feminism as some kind of charity or favor. While pro-active steps need to be taken for any effective change to occur, in my opinion, my taking of those steps has never been me "doing right" by someone else. I've only followed my own inner sense of correctness in seeking out the most talented writers of any biological composition on the planet Earth and obliterating the obstacles between them and the achievement of their dreams.

Q: "Can I ask a followup question?"

Q: "Can we assume the same goes for race, aren't you, like, unbeknownst to most of the public, a huge advocate of racial people?"

A: Yes, Kevin, I have long said that racial people are just as great in any situation capitalism can muster as their more traditional, non-racial counterparts, but again, please stop giving me credit for making the world better because to me, I'm just engaging in common sense.

A: Kevin I hate to check you but I think you left a Q out of there -

A: - Kevin, calm down, we're not going to become better people by punishing each other's ignorance, it's okay for you to be a flawed person. The answer to your question is yes, a thousand times yes, I am an advocate of literally everything it's possible to advocate and you can look that up, there's a paper trail, not that that's what this is about.

Q: "So, in summary, is it safe to say that you're like one of the only straight white middle aged men that the world shouldn't punish for the cultural atrocities of the before-fore times?"

I wipe what you would call front to back I think but the thing that makes me (and apparently 40 percent of people polled) a monster is that I wipe STANDING UP, that's how I learned to wipe as a kid and I never got a "okay, now that you know how to wipe your ass, it's time to do it sitting down" lesson. I just got the "here, this is toilet paper, get the poop off your butt" orientation and now it seems that it's baked into my neurology because I tried doing it the sit-down way and I could sense that it works a little better technically but my brain just kept screaming WHY IS THIS HAPPENING, WHY ARE YOU REACHING INTO A TOILET WHILE YOU'RE STILL ON IT

I was told I'm allowed to ask for more proof if I want.

I tend to assume vodka and I know it seems unlikely that Rick wouldn't use sci-fi tech to somehow augment whatever he drinks but I think in rick's mind part of the "addiction" to the flask of good old fashioned booze is that it anchors his identity, and I think he knows that if he augmented the booze or the flask, then why not just whip up a very rudimentary nanobiotic alcohol dispenser in his body or inject himself with a plasma component that just amounts to always having a certain blood alcohol level, and I think the reason he doesn't do that is because he's a little afraid he'll lose sight of who he is

I held onto a hope this season that we could get Vin Diesel because I hear he's an avid roleplayer.

Are you kidding me, fuck those people!

Well, I'll tell you right now, Joel McHale is in an RAM season 3 episode and I literally just came to this AMA from a record session with Keith David reprising his role as the U.S. President.

It was a joy. I didn't have to deal with any of the pressures and anxieties that I'm sure are a constant over there. Stepping off an elevator into a lobby with a giant MARVEL logo is already insane, it feels like you're being brought into the Pentagon. Then to finally meet the mucky mucks over there like Kevin Feige was so refreshing and uplifting....I've been pitching and babbling about high concept stuff for twenty years and I'd gotten so used to this dichotomy of the "suits," who loved sports and couldn't wait to leave work and who barely cared about the medium, versus the writers, who were the only nerds on a movie, constantly irritating the suits with their logical points about the original property and who were looked at as a necessary evil that weren't welcome on set....so to step into that ministry, where it's official, we WON, the people that care whether a super hero movie is a good are now the people controlling everything...it just feels glorious, even before you get into the experience of them saying, "so, we haven't shown this to anybody yet, would you mind taking a look?" And getting to see what these things look like when they're 80 percent done...it was a breathtaking experience, I can't gush enough about it. It would be more than a dream come true to get back over there and talk to them about more stuff ...I mean, it's what we do for "fun" so if you imagine getting to do it for a check AND the possibility that you're somehow helping...it's as intensely orgasmic as you'd think, times ten. And I don't care how late in a production anyone might want to talk to me about projects in that genre...I'd love to get a chance to show them what I could do if I was there earlier. But we all know me, I'd probably just choke and screw everything up so maybe I should happy with my Dr. Strange tote bag and the bag of awesome weed Tilda Swinton gave me JUST KIDDING I didn't talk to her. I went to the wrap party. Steve Levy almost choked on a overly dry slider and had to puke it up near a very bummed out DJ. I'm telling you that because I know he'd want you to know.

I haven't seen Atlanta yet. I'm a bad friend. I hear it's great, I have to watch it.

How could anyone be anything other than stoked about him as young Lando...well, I guess maybe if I were still in college, I might respond with a thought provoking essay about physical traits like race and when they should be committed to in writing and casting but after all those spock logs were burnt would anyone be any happier and can anyone think of a better person to be young lando than old Troy, no sir.