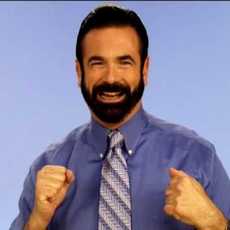 I am Billy Mays III, only son of Billy Mays. (Also known as Infinite Third) Ask Me Anything.

I appreciate this question.. and I will answer the best that I can.

My father was not a perfect man. He grew up in a notoriously shady town and it's a wonder he ever even made it out of there alive. He liked to party growing up and these bad habits did indeed follow him into his adult life. He struggled with many different impulses throughout his life. BUT...

I can say, without question, that in the years before his death (I would say the peak of his career) he was in no way a "cokehead." He was dealing with a bad hip and 2 botched hip replacements (his third was scheduled for the day after he died) and was overprescribed painkillers and other stress-related drugs. And with his history of addiction, this was not a great combination. It got to the point where he had trouble being his public self (traveling, always working on shoots, etc..) without painkillers to mask his excruciating hip pain.

And as for the "cocaine" found in his system, it is quite possible that he indulged in the drug sometime before his death but once again... HE DID NOT OVERDOSE. Actually, the drug itself was never found in his system. Only a certain residu that is usually attributed to cocaine use.

For the record, I'm not trying to cover up anything. I just think it was a shame how the headlines were written after the report came out and the fact that people say he "overdosed." I truly believe that "prescribed" drugs played much more of a role in his death than any "illegal" substance.

Notwithstanding, I will not lie and say my father didn't struggle with drugs throughout his journey. But, as I lived with him for the final 5 years of his life, I know that he was not a "cokehead" and that he tried his best to be a good human being.

Anyway, sorry for ranting. Thanks for posing the question like a real person.

EDIT: Thanks for the nice replies, everyone! And thanks to whoever gave me Reddit Gold! I will... do whatever- Reddit-Gold-is-used-for with it. And I will enjoy it, I'm sure!

He would rarely yell when not in front of the camera. And, as he would say, "I'm not yelling, I'm projecting!"

I enjoyed the shit out it! Huge South Park fan and I'll admit, I was nervous when I heard that he would be part of the Dead Celebrities episode. I watched it alone and tried not to publicize it but was pleasantly surprised and honored. I really want to meet Trey and Matt someday.

My dad always had a grudge against him and, at first, I tried to be a peacemaker but then I decided to just let him have his silly rivalry.

Years later, I met Vince and he had only nice things to say about my dad.

For fun, I sometimes play up on the rivalry but I have no interest in any real conflict.

THIS is one of my favorite random comments so far.

Oh, by the way, this AMA is sponsored by OXI-CLEAN. POWERED BY THE AIR THAT YOU BREATHE, ACTIVATED BY THE WATER THAT YOU AND I DRINK.

Not quite but I think my voice is getting stronger with age. (I'm 26)

There are A LOT but this is definitely up there: http://i.imgur.com/X7kSYT9.jpg

He took me to LA when he was on Conan (one week before he died). I always said that if he got on Conan that he'd HAVE to take me with him and when it was confirmed, there was no question. He said: "We're going to LA."

He played football in college (WVU Linebacker) and I'm pretty sure "pitchman" was his only real profession.

I love them! My dad wasn't very computer/internet-literate but he would always mention "Jaboody Dubs" to people who were. We've been in contact with the man behind the dubs and he's good people.