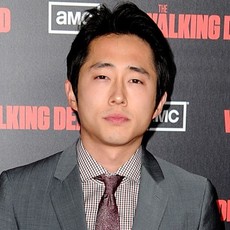 He smells like a fusion of vanilla hand soap and motorcycle musk.

1) Andy's british accent is so perfect. It's almost as if it was british. He's actually Honduran. His name is Ned Holness.... No he's british and it's so proper and nice. The dude is great.

3) The make up on our show is so amazing it's hard not to do a double take when you see them. Especially during the well scene. Greg Nicotero didn't let me look at the walker before we started the scene, so when I finally got down the well it was pretty ridiculous.

6) I think there are some coming that I can't spoil:)

7) No. All we do is eat catered food and ask about our motivations. We'd all die. Instantly.

9) sometimes with practical effects like stopping mid take and replacing the arrow or knife with a fake one. OR sometimes with CG. The people who do all the effects and Special effects are AAAMMMMAAAZZZZIINNNGGGGG!!

I think it's great that you hate Lori. When I hear something like that I smile and think about what an amazing job Sarah Wayne Callies has done and also how fearless the writing is with her character.

What I find interesting about TV and the audience reaction sometimes is that everyone tends to want each character to be likable or consistent. Even with villians, if they are consistent, they kind of like them. Then, when a villian displays some sort of warmth, they go bonkers because they love the idea of a villian with a heart of gold.

But how come it's harder to swallow when it's a good person that isn't consistently good?

I remember reading the comic and HATING Lori. I hated her because she was bipolar; irrational in one moment but then suddenly rational the next. Loving one moment, and scornful the next. But then I realized as I took a step back and looked at the whole that her character is completely necessary and makes for interesting drama.

I'd love to have my death be via explosion. I'd be on a motorcycle and a heard of walkers would be chasing me down a highway. They would also be on motorcycles (it'd be way down the line, when the walkers eventually figure out how to ride). I'd look behind me and say, "Oh F-" but it would cut to me looking ahead, right before I said the F word, to a giant Chevron semi. I'd look back one more time. Grit my teeth, then pull out a comically large stick of dynamite from my pant leg. It would say, "TNT" on it. Trinitrotoluene guys... come on. Then I'd take an large match, I'm talking like 3 feet long and drag it on the ground to light it. Then I'd light the stick of dynamite and throw it at the truck in front. I'd do a front flip with my motorcycle over the blast and the blast would project me on to the road in front of me. The explosion would kill the giant walker biker hoarde and I would look back in satisfaction.

Shortly after, I'd realize that I'm physically fine but will to live would diminish as I had done maybe the most bad ass thing I possibly could in my life. Then a harem of bodacious babes would come of from the sides and we'd cut to black because it's still basic cable. Then we'd reopen on me with lipstick kisses all over my face and I would say, "all in a days work." Then I'd fall to sleep/death with a smile on my face.

I'd reanimate immediately, and would have to be sexed to death again. As my brain would be realized to be actually located in my nether regions.

I hope this happens.

oh man...thats pretty flattering. Thank you. I don't know if I would be considered the most liked character, but definitely it's a blessing and I'm thankful all the producers and writers for letting me be a part of something like this, with a role like this. Definitely a dream come true.

2) it was rough. Those two are awesome people. I love those guys. Part of what made this whole experience for me so great was that I got to work with people that I really enjoyed. Jeff and I would have dinners on occasion, just us, and he would just tell me shit. Like stuff you can only know with age. What an amazing situation for me. Thankfully, I can still talk to him via the magic of communication technology, but damn, I a going to miss him on set. He was my trailer neighbor.

Jon is awesome. He and I probably hung out the most out of set, just because we both would play basketball. He is pretty damn good. I talk to Jon still a lot so it's all good from that stand point, but again, not having him on set is pretty rough.

3) It was an unfortunate situation. It was stuff that was kind of over all of our heads. I think that it definitely could have played out a lot better than it did, but at this point, it is what it is. We have Glen Mazzara to fill the huge void that Frank left. So we are going to be great.

5) I think that's a writers question

I'll talk a bit about how the whole role came through for me. I had just moved to LA about 5 months prior from Chicago. I was waiting tables and such, booked a couple of commercials, and was heading into my first pilot season.

My manager, got me an audition for this ABC pilot, which I ended up going to test for. For those who don't know, "TEST" means that you are basically in the running for the role. They work out your contract, tell you how much you'll make, blah blah blah...all that stuff then you go in and you do your final audition in front of EVERYONE. The studio, the network. It's CRAZY.

So I went in there and did the audition for ABC and I literally thought I couldn't have had a better audition. I walked out of their fist pumping. I NEVER fist pump (unless I'm playing hockey and I scored an outstanding goal).

I went to Denny's to go celebrate. WOO DENNY's! I was mid way through a stack of pancakes when my manager called and said, "We'll get the next one buddy." I was so bummed.

But what was amazing is that, it ended up being the best thing that had ever happened to me. A couple of months later, I auditioned late in the pilot season for TWD and I got a call back. Then I went to Frank Darabont's office to do an audition with just him and a reader opposite me. It was so much more relaxed. Frank is great. He loves actors. So I ended up booking it that week.

The crazy thing is, is that if I had booked that ABC pilot, I wouldn't have been able to audition for TWD. I would have never had this opportunity. I get to be Glenn now. That other show didn't even get picked up. Blessed.