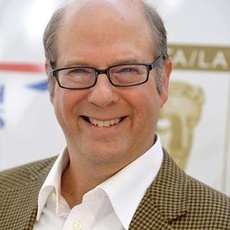 About
well known for his role as Ned Ryerson in Groundhog Day, as well as portraying Commissioner Hugo Jarry in Deadwood for nine episodes and Bob Bishop in Heroes for eleven episodes over the second and third seasons
Reddit AMA Stats
Tag Cloud
actor, playwright

I'm Stephen Tobolowsky, a character actor who's been in over 200 TV shows and films. Two years ago, Reddit helped me fund my own concert film, "The Primary Instinct" (now on Hulu). AMA.

IAmA character actor who was a appeared in over 200 films and TV shows, including "Glee," "Groundhog Day," and "Memento." My name is Stephen Tobolowsky. AMA.

I have acted in over 200 TV shows and films, including "Groundhog Day," "Californication" and "Memento." Now I'm making my own movie. My name is Stephen Tobolowsky. Ask Me Anything.

In the audition for Groundhog Day, I read with Harold Ramis and he said "Be as broad as you want. You're the spice in the stew. Bill is the stew." That's when I started attacking Harold as Ned Ryerson in the room. I almost took off his pants. That's when he said "Okay, okay! Not that broad."

Harold Ramis one day took me aside and said "Being an actor is impossible. You need four heroes in your life to succeed as an actor." What he meant was that you need help from four unlikely sources to succeed. It's too hard to do it on your own. You need help coming from where you don't expect it, like four Gandalfs riding over the hill on his white charger. Of course, Harold didn't know it at the time but he was one of my heroes.

He said, "You do whatever you want. Because comedy lives in the two-shot."

We were at a party in the mountains in Malibu, Harold once pull out his guitar and played a new song he had written. It was so beautiful, so filled with joy. It almost felt like that was the real him.

The weirdest experience was when I was in Canada. They had three channels on the television. All three had me in various in stages of baldness. It was like Dorian Gray in reverse. I just kept getting older and uglier so I went down to the bar and got a drink.

They wrote back and said "Are you really Stephen Tobolowsky?"

I said "Am I really in Romeo Must Die?" It was kind of a stand-off.

I don't think i'm in that movie. It's been on there for years.

We were about to start shooting Groundhog Day and on the first day, there were 500 townsfolk gathered there to watch us. Bill looked at me and said "Do you know what these people need? DANISHES." Bill took me into the local bakery and bought every single baked good in sight. He put boxes in my arms and we ran out and started throwing the doughnuts and sweets at the crowd.

It was the greatest public relations move I've ever seen.

I used to. The birth of my first son happened, and whenever I put him to bed, I'd light up a big joint to relax. Then, one night my wife was working, I put the baby to bed, lit up the big joint and my son woke up crying. And I realized I was too toasted to take him to a doctor if anything was wrong.

I threw the pot away. Have not smoked since.

Goddamn it. I watched all of Romeo Must Die to see if I was in it. But now I think that the movie I actually might be in (and not remember myself in) is Romeo Is Bleeding.

A lot of times when you shoot a movie, like The Insider for example - that movie did not have a name at the time that I was shooting it. The name comes out later after the movie is done. So sometimes you make a movie and you don't know the name of what you've been in. So it makes complete sense that I might've shot something and not known whether it was Romeo Must Die or Romeo Is Bleeding. Complete Sense!

My wife says "Of course!"

Twice! I consider it high praise to be mistaken for Wallace Shawn.

But if you saw Wally and me together in person, there'd be no mistaking one for the other.

I had to re-say that line for the "airplane version" of that episode. We had to change it to "He's rich as LUCK and has LUNGS like a moose".

I said to the sound editor "Lungs like a moose??! WHAT DOES THAT MEAN?" But that's what we had to say.

My wife has instructed me that all such questions have to be referred to her.