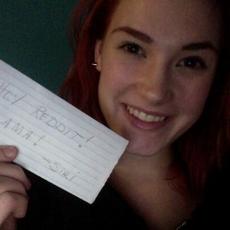 The average American woman is a size 14, 5'5" tall, and weighs 164 pounds. Look at this website: What Real Women Look Like (http://www.mybodygallery.com/search.html?gender=female&height=165&weight=73&age=any&pantSize=0&shirtSize=any&bodytype=&p=2) and you can see the variety of ways a 5'5", 160-pound woman can carry her weight. Most of these women look just fine to me, but by porn's ridiculous standards they would be considered fat or obese.

...But, despite not having been told face-to-face that I'm "too big," I have indeed felt a lot of pressure from the adult film industry to be smaller. In my case it seems to manifest by certain companies and producers simply ignoring me because they think I won't "sell." It doesn't take a genius to look around me and see that girls who are 20 pounds lighter than me are considered to be more marketable and less of a "gamble" by producers and directors. There's a handful of "top-tier" companies who have never hired me for this reason, and probably won't ever hire me--unless I magically become a size 4. That's their loss. (And genetically, that is literally not even possible for me - my hipbones are so wide that I will never wear a pants size smaller than an 8. If you see a photo of me naked, the widest part of my hips is already the bone itself). I could starve myself trying to be a more "perfect," marketable porn star, and I would get absolutely nowhere, except hating myself. Besides, I wouldn't ever try that, because one of the many reasons I became a porn performer was to change the image of what a successful, attractive adult film star looks like.)

I have a large, extremely loyal fan base which is very willing to spend money to support me. My fans are also fans of many of my peers who are average-porn-star-size-4. In the fan's mind, there is no difference in desirability between me and my thinner peers; we just have different body types. Each of us is equally valuable to the adult industry; just as marketable as the other. I just wish that more of the decision-makers in the adult film industry could be on board with me on this. It's a change that is definitely going to have to come with time, in baby steps, and with lots of hard work.

In the security line at the airport. And it was a TSA agent.

Yes, he does. We are equal-opportunity non-monogamists!

For the most part, no. But every once in a while, I have a scene which is so hardcore it leaves me too sore to enjoy other sexual activity for a few days, in one case two weeks because I was vaginally torn during the scene. I try to avoid that kind of situation by knowing and explaining my physical limitations to male talent/directors, and by not working with giant cocks.

All the time. And we have sex while we watch it.

Also, I was most surprised to find out that all female performers are expected to work as usual while on their periods. And the industry's incredibly elegant solution to prevent a girl from creating a bloody mess on film? Shove makeup sponges up your vagina to block the flow of blood.

I'd be a makeup artist. It requires a lot of skills I possess and enjoy putting to use: entrepreneurial spirit, creativity, and a steady hand, to name a few.

Depends on the performer and the director. Nobody's going to force a girl to finish a scene if she can't continue, but they sure will judge her and probably tell everyone else about it if she can't at least make it through to the pop shot. Personally, the attitude I've encountered most often is, "If your vagina can't handle the biggest penis the porn industry has to offer, then you're in the wrong business." Which is part of the reason why I'm independent (not with any agency), so that I can have more control over the size of the guys I'm paired with.

Well, if a girl got a sponge pushed so far up there that she couldn't retrieve it herself, she'd have to have someone else (a man with larger hands, perhaps?) retrieve it for her. Not a health problem, just awkward.