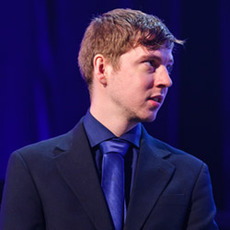 I am Sean "Day[9]" Plott, eSports fellow & host of SPELLSLINGERS, ask my anything

If you surf through some of my old posts on forums, you'll see an angry little kid. I'm super embarrassed sometimes when I see the sorts of things I used to do. Gaaaaagh.

But, I've always wanted to be nice. I like to be nice and to help out. But how does one "work" on being nice? Here's my routine:

When I wake up in the morning, I think about all the people I'm going to talk to and interact with that day. I think of how a conversation might go so I have an expectation, and I try to think of how I WANT to come across in that interaction. I think of all the things that people could be frustrated at me about, how they might say it to me, and how I can make that experience NICE for the other person. I literally rehearse in my head various situations until it sounds right.

Suppose I'm going into a performance review with a boss later that day and I think he might be angry at my recent work. I'll try to rehearse exactly what I want to say to make the experience nice for HIM. How would I posture my body language? What words would I use? How would I repair this situation? After a while of talking to myself, some possible ideas don't "feel right" and others feel really good.

The feeling I look for is one of calm and relief. Ever gotten into an argument with someone in your head? Feel your face getting hot and your heartrate increasing? That's bad. Don't say those in real life. I always feel a little mental "click" when I've thought of the right thing to say. It feels warm and I feel like it'll be nice for the other person.

Most importantly, I take time every few days to think about all the rather mundane, dry, utterly forgetful moments and conversations throughout the day. That I think is the real trick. It's so easy to "feel fine" during a conversation and to be unaware if it's negatively affecting anyone. That's where I've found little habits I do that may be offputting, like looking away from someone as they tell a joke, laughing into the distance. Fuck that, if I'm gonna laugh, I now try to look RIGHT at the person so they FEEL my enjoyment.

After years of reflecting, adjusting, rehearsing, you just become more cheerful and happy. It took a hell of a lot of work and reflection, and I'm sure I grate on people and get snippy, but it's something I think a lot about.

I worry about someone having a struggle in a day, and I say the one thing that pushes it into a "bad day." Everyone has immense struggles in the own life and I don't want to add to it. I want it to be better!

I would rather fight 1 horse-sized Artosis because I fought and successfully defeated one every year at WCG for 10 years.

DEFINITELY "THE ROPE." For any who don't know the story -- I was streaming Amnesia: The Dark Descent over a few days around Halloween. I had committed to beating the entire thing on stream, but I got a bit stuck towards the end.

So, I broke my usual rule of asking the chat for advice. I told them to let me suffer in the very first episode, to never help me through any tough stuff NO MATTER WHAT. Naturally, I'm glancing over at chat and saying, "What now? What do I do?"

People began to spam. 17,000 people began to spam. "You forgot the ROPE!" "UGGGH How does Day[9] miss everything?" "THE ROPPEEEE." Even the penis/hitler spamming Twitch trolls cowered before the coordination of nearly twenty thousand eye rolling nerds.

I slowly backtrack my way to the torture room to look for the rope. Sweat is trickling down my forehead. My heartrate is increasing. The physiological reaction is not from fear. It's from embarrassment at being unable to find a rope item in a tiny room with not many items in the first place. After a while, I look up at the chat and say, "Guys... there's no rope in here..."

17,000 people then informed me that there was never a rope. "That's why you don't ask the chat for help," they said. And so I went back to cluelessly bumping around until I eventually beat the game.

And now a few million people never stop reminding me not to forget the rope Kappa.

Go forth and be awesome <3

I'm a multitasking animal. I work extremely hard with intense focus and don't take many days off. We recorded Spellslingers on a weekend after I had worked 30 straight ~10-12 hour days so there ya go :P. But, if I had to say what the secrets are

Frankly, I'm not terribly concerned yet.

Once upon a time, we showed an initial prototype of Atlas to a playtest group. We'd only been working on the game for a few months and one of the playtesters asked, "why did you choose to remove patrol?" I had to explain to him that we simply hadn't added it yet, not that it was a deliberate scheme.

It's pretty easy to view a company like Twitch as a huge megacorp that is slamming down an infallible, thoroughly deliberate system. But, if you look at what's happening, most things going wrong w/ Twitch muting cannot possibly be deliberate/intentional - for example, Valve's International VODs have muted chunks because it played music owned by Valve. Also, artists are claiming they don't want their music silenced on streams, that they are happy to have streamers broadcasting it. Honestly, I cannot possibly imagine a world where Twitch deliberately wants all of this to happen.

So, when I take a step back, I see a very complex, big system has only been around for 24 hours (as of me writing this). I'm not going to get overly freaked out because technology companies have historically fixed huge stuff like this quickly. It's totally clear that all the accidental muting/false positives are bad and the system still needs improvement. However, I'll just wait patiently for a bit before I get too worked up. Twitch are pretty good at listening and fixing stuff.