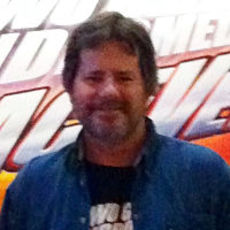 IAm (We are) Guys From Andromeda (Scott Murphy and Mark Crowe), creators of the Space Quest Series, and Kickstarting up a new game called SpaceVenture.

Hey, Everybody, ready to go for it?

We have other fundraising plans. We'er still hoping for the best! But Paypal etc is one of our plan B's.

Thanks for the compliment on SQ!

We're VERY flattered by them. To have fans so devoted is very cool!

Roger was the antithesis of all other game characters of the time. Everyone else was noble, doing good deeds for princesses. Roger wanted none of that. It was more like me. Not as much Mark , but we like d the idea.

No Roger Wilco. We don;t own the rights. Post ken Williams-Sierra sold all the IP off. Greed...

And you are correct. it caused us a lot of work. the main loss was so much great text that would have been available depending on what people weird things typed. I miss that. It's why we're working on a hybrid UI. Mostly point and click for redundant tasks but some parser interaction in some instances.

Have you heard our new character Cluck Y'egger speak yet? :) http://kck.st/KeTgtH

SpaceVenture is a game to get our studio started. We want to expand our range of titles and genres.