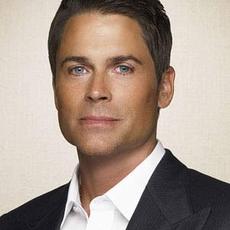 About
Robert Hepler "Rob" Lowe (born March 17, 1964) is an American film and television actor. He garnered fame after appearing in such films as The Outsiders, Oxford Blues, About Last Night..., St. Elmo's Fire, Wayne's World, Tommy Boy, and Austin Powers: The Spy Who Shagged Me. On television, he played Sam Seaborn on The West Wing, Senator Robert McCallister on Brothers & Sisters and Chris Traeger in Parks and Recreation.
Reddit AMA Stats
Tag Cloud
actor

Well, being youthful is an inside job. Think about what youth is. It's kids, kids are enthusiastic, energetic, interested, optimistic, engaged, and curious. If you're not all of those things, you can have no lines on your face and a 32 inch waist, and no one is going to call you youthful.

I have great affection for all of them, but a real soft spot for "skinny arms". All he wants from life is some mayonnaise.

I do bath in the blood of innocents, but it is so hard to come by that six years ago, I developed my own line of men's grooming products that I use everyday. It's called Profile 4 Men. You get it at Nordstrom and at http://profile4men.com. Powerful anti-aging and overall skin revitalizer.

If Sorkin writes it, I'm in.

My favorite Parks episode is the one where Chris gets the flu. Definitely one of my comedy career highlights. Honorable second mention goes to the scene where I play "air bango".

If Aaron Sorkin was writing it, I would be there with bells on.

I remember the first time I read the script for that episode. When I got to that scene, I cried.

Working with Farley and Spade, they were like a demented old married couple together. They fought over everything. From what strip club to go to at night, to who stole whose sandwich on the set, and who was spending too much time with me.

In today's world, being part of a cultural/internet trend is more significant than winning an Oscar, so I'd like to thank my family, my agent, my managers, and all people who are struggling in the shadows of being terminally handsome. THIS is for you.