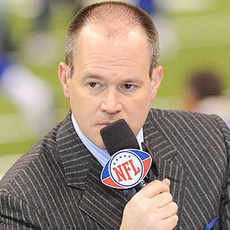 Without knowing you personally and what you stand for, I accept this with all humility. But, if you're some sort of miscreant, I will forever disavow this exchange.

I'd ask him: "Just how important is Rich Eisen to the NFL Network and shouldn't he get a raise?"

Not a chance. It had to be the worst prank attempt of all time. Not even Te'o would fall for it.

Oh, Nutwrinkles. Do you even need to ask? Of course. We cool.

They have not. But I don't let that get me down. I'm going to keep on keeping on until I break that 6 second barrier in a perfectly tailored Amir Fashions suit, tie and pocket square. And once I do, I dare Canton to keep me out. Nay, I double-dare them.

I don't think ANYONE wants to see this white man jump.

I know Reddit doesn't have a "the" in front of it. It was my way of inoculating me for any undeserved grief Dan might of thrown my way for coming on here. I know for SURE that Dan hasn't heard of Reddit. But, now that's changed.

As far as leaving ESPN, it was quite a difficult move, but one that was sort-of made easier for me by management at the time. The SportsCenter I was doing in 2003 was far different from the SportsCenter I loved doing in the mid-to-late 90s. Technology had a lot to do with that, actually. When I first started doing SportsCenter, there were no hand-held devices or widely-viewed websites on which you could already see a final score, let alone watch a streamed, full highlight of how the final score came about. SportsCenter, in the 90s, was essentially the main way for you to find out what happened and see how it happened. That was all changing, from a bottom-line ticker to an explosion of talk-radio and internet sites. So, SportsCenter went from being a show that required a smartly-worded on-camera lead-in to an extended narrative-driven highlight to an information-laden full-screen scorepanel graphic to a show with fewer lead-ins and shorter highlights but far more analysis from analysts who were encouraged to give hard-edged points of view, sometimes in the extreme. It reduced the role of SportsCenter anchor, in my mind, to being more of a traffic cop and occasionally, the role of mediator in a sports-version of Crossfire. I wasn't interested in doing that much. So I wanted to do fewer SportsCenters and more of things within the ESPN and Disney toybox. That wasn't made available to me as much as I would have liked. So I said 'no' enough times that ESPN and I said 'adios' to one another. I haven't looked back since. I love what I do and with whom I do it. Every single day. Greatest experience ever.