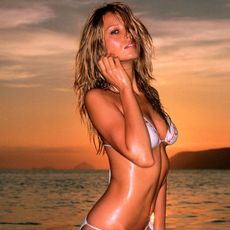 About
Petra Němcová is a Czech model, television host, and philanthropist. Němcová suffered an injury in Thailand by a tsunami resulting from the 2004 Indian Ocean earthquake, while her fiancé the photographer Simon Atlee was killed, Němcová is the founder and chair of the Happy Hearts Fund.
Reddit AMA Stats
Tag Cloud
model, and-philanthropist, television-host

I am Petra Nemcova. I was on the cover of the 2003 Sports Illustrated Swimsuit issue. One year later I survived the 2004 Indian Ocean Tsunami. I am also the founder of the non profit Happy Hearts Fund. Ask Me Anything.

the one which you are given at birth ;)

Every disadvantage can become a advantage, it is depending on what you do with it. For example, in primary school I was the tallest of all the girls and boys in the classroom. I didn’t like it. It was a disadvantage but became an advantage in my modeling career. In terms of beauty, when people see me they may quickly put me in a box. But when they meet me I get my way out of the box. Beauty for me became a tool to open doors. Embrace all the gifts you get from life they are there for a reason.

There was no warning at all. Everything happened within seconds. First i heard people screaming and then the whole bungalow which i was in with my partner started to crumble from the tsunami waves.

Thanks for your message on the proof, I already sent it to Reddit :) feel free to check my twitter: https://twitter.com/pnemcova

it is hot in the morning, hotter during the day, and hottest at night. And the bikinis just get smaller and smaller. Go on prizeo.com/swimsuit and take a chance to see for yourself ;)

checkers because i used to play them with my whole family and grandparents during my childhood. What is yours and why?

Audrey Hepburn was one of many ladies who have inspired me when I was growing up.

We cannot control nature but we can prepare and protect ourselves with knowledge of how to recognize natural disasters and what to do when they happen. That has proven to often lifesaving.

Ahoj jak se dari? I think probably in US as I stayed away in Press in Czech Republic for a long time. Only when the Tsunami happened that is when czech wanted to know about me.