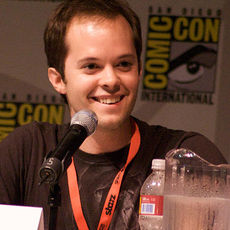 I was super excited at the way the writers shaped Fargo over the course of the seasons. I was getting a little tired of Fargo basically doing criminally dangerous things that put the town in peril week after week, so it was nice to transition away from that and ground him as more of a human, rather than a plot device.

Just me talking like a girl. Maybe they put a bit of an echo on it or somethng, but really, that's just me.

In the script, Carter has a line when S.A.R.A.H. first speaks, he says "Fargo, is that you talking like a girl?" to which Fargo replies "No". It took that as "yes", and in the table read, I just jumped in and started talking like a girl robot. Then they let me do it on the show.

Thanks! I've got a few things coming up. I did a syfy original movie with Greg Grunberg, Brad Dourif, and my buddy Mark Hildreth called "End of the World" that should air at some point on Syfy. I just did an episode of Psych. I did some stuff on a webseries called True Heroines that should be around soonish.

I'm also a part of a new project called RedShift that in the early stages right now, but will film in the new year. It's a pretty awesome sci-fi genre thing that I'd love to release details of, but I''ve gotta be mum on that for now.

I also did another thing that I don't think I can talk about yet. Oooh the mystery!

I have some clothes, and a mug. And a bobble head. I totally forgot to grab the Fargo etched glass desk lamp thing though.

Basically, every time someone did their last scene, you'd hear "That's a series wrap on insert name here" throughout the night. The worst though, was when they finished filming on a certain set, and they'd announce the series wrap on that specific set, then start dismantling it immediately. I think the Sheriff's station was completely torn down before we fully finished filming. Also, seeing video of Global Dynamics getting torn down with a backhoe was pretty "Oh, yeah, we're done".

There were a variety of different "types" in the waiting room auditioning for Fargo, so they were casting a really wide net. When I finally got in the room to audition, I realized I'd met the director of the pilot, Peter O'Fallon, while doing Wonderfalls. We reminisced about the time I ate all his ox tongue at a Korean barbecue, (because ox tongue is delicious) and then spent about twenty minutes doing the scenes a bunch of different ways. Sample directions: "Do it like you're high", "Be more nervous", "Snooty, but mischievous" Stuff like that.

Then I guess the next day I heard I got the part!

Also, she was born without a tail, so she looks like a fluffy little bear when she runs around.

My favorite actor to work with was Flash, because he was cuddly and slept in my lap. (Flash played my dog).

Too many to mention, but one that stands out right now is on a blooper reel. Niall, who plays Zane, and I got really hyper for some reason, when we were just in the background of a scene. We literally could not stop giggling, and I still don't know why. That happened a lot with the two of us.

My favorite color is black, which I guess is a shade, which means maybe I didn't answer the question correctly, which makes me a rebel. A real deal rebel, baby.