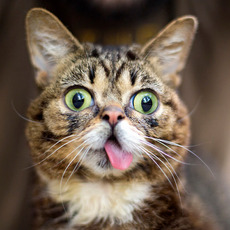 About
is a female cat and Internet celebrity known for her "perma-kitten" appearance. Her photos were first posted to Tumblr in November 2011 then took off after being featured on the social news website reddit "Lil Bub"
Reddit AMA Stats
Tag Cloud
internet-celebrity, meme, cat

Thanks for your question.

I am feeling better than ever, which is very exciting. As some of you may know, I have a disease called osteopetrosis. I am the only cat in recorded history to have been born with it, which is why it's been so hard to figure out how to treat me.

The disease is essentially the opposite of osteoperosis, where my bones get thicker, more dense and more twisted as I grow older. I almost have no marrow cavity!

So the growth of my bones is why I look so amazing, but it also makes it very hard for me to walk. I was able to run and jump as a kitten, but at about 7 or 8 months my mobility became limited, and continued to get worse until about a few months ago, which I'll get to in a minute. If you've seen the documentary, you know there was even a time when I wasn't able to walk at all, and was in a lot of pain. I know I look super happy all the time, and that's cause I usually am, but when I'm in pain I don't look like that. I went to see a specialist who said there is no cure for my disease, and it was probable that I wouldn't be able to move at all within a month, or even be able to move my jaw to eat. It was a horrible time for my dude and myself.

My dude was in a tough place. He didn't want to keep me alive if I was in so much pain. It was a really scary and difficult time. But he wasn't going to give up that easily, so when his friend Danilo, the camera guy for the VICE documentary "Lil BUB & Friendz" recommended he try Reiki healing, he figured it he may as well (even though he was skeptical). He found a wonderful lady named Anne Clemmer who came every day for 2 weeks and treated me for an hour every morning. After the first 2 days I was able to move again for the first time in over a week, and my mood improved substantially. And after 2 weeks I was back to "normal".

That was in December of 2012. So for the following months, up to about 3 months ago I was happy, but still had to "army crawl" to get around, had occasional relapses, but with the help of some joint supplements (glucosamine), some physical therapy, additional energy healing and a lot of love I was a relatively happy cat who would tell my dude when I had to pee or eat or get on the couch. But I wasn't really able to run around.

Then I got a message from a fan about a device called the Assisi Loop. It uses Pulsed Electromagnetic Field Therapy (PEMF) to increase blood flow, and acts as a very effective anti-inflammatory with no side effects. It's a sort of wire ring with a button on it, and you place the ring around the affected area (in my case my whole body), turn it on, and it works for 15 minutes and automatically shuts off. This is not crazy magnet voodoo stuff... this treatment has been used on humans post bone surgery and for other treatments for years, although not commonly in the USA. You can look it up on that Wiki thing.

ANYWAY... I knew it wouldn't hurt, there were no side effects, and it was free so my vet prescribed it and my dude gave it a shot. The very first time he laid it on me, I started twitching and my dude kind of freaked out. But I was ok. After two days of two treatments a day, my back legs were twitching a bunch, and my dude got worried. But my vet said to keep trying it for a few days (it turned out they were twitching from the increased bloodflow, kind of like when your leg falls asleep... only mine were asleep for over a year).

...a week later I was standing upright for the first time in almost 2 years! And I was walking instead of pushing myself around with my back legs.

A month later I was "running" and playing again, and even jumped on my dude's lap a few times.

And now... about 4 months after treatment, while on this book tour, I have been running full speed like I haven't done since I was a kitten. I just posted a video on HERE. It's amazing.

So now here's the super cool part. An expert in my disease (osteopetrosis) found me online and contacted me. She never studied it in cats, but her doctoral thesis was on osteopetrosis. She even came to my book signing in New Jersey to talk to my dude about my condition. And then when she saw the Assisi Loop sitting there she said "is that a PEMF device?!"

And she then explained that that was really good news. It means that I have a specific form of the condition that IS somewhat treatable without medication. I have these cells called "osteoclasts" but they're just too big and can't break down on their own, so my bones just keep getting bigger. But the PEMF from the Loop actually helps break those down, in addition to relieving pain. We also found out that the reason I do so much better with mobility when traveling is because the vibrations of cars and planes helps with this as well. She recommended I get a vibration plate to help with that at home. So even though the Assisi Loop isn't specifically designed to treat my condition, it coincidentally does. And that's a perfect example of SCIENCE AND MAGIC.

Sorry for the long answer. But I've been very excited to share this awesome news, and this seemed like the perfect time to let everyone know what's up.

My dude and I are TOTALLY STOKED, to say the least.

Hello! Yes, I have some words for Mayor Stubbs:

1. So glad you're still rocking life on Earth. We need you pal.

2. No, as a space cat I have no interest in the political affairs of your planet. I like to focus my energy on Earth animals that need help.

3. Dog problem?! I love dogs. We need to learn to all get along for the greater good of goodness.

I have no plans to come to Ohio... yet. So I don't want to hold back the best decision of your life.

With that said, I WILL help you propose to her on www.lilbub.com. Email me. We can make this happen.

1) Being from space is normal. I mean technically we are all from space. I just happen to from somewhere else in space. My biggest challenge is your intense gravitational pull, which is why it's so hard for me to get around. Thankfully I've used science and magic to come up with a very effective work-around. GOOD JOB ME.

2) Earth fish are cool, space fish are better. They are super tiny and float around and I can catch them on my tongue by cruising through the atmosphere. Not so much here.

3) Meeting Grumpy Cat was pretty amazing. I feel she is the yang to my in. She completes me.

4) Smoosh doesn't get jealous. He sleeps and eats paper.

5) I don't mind if people mistake me for a boy. I didn't realize my name meant "little boy" in German when I got here. Oh well. Boy, girl, whatever. As long as you always do a good job at everything that stuff doesn't matter.

1) BUB's claws have never been caught in my beard. Her saliva on the other hand....

Video answer coming later on my youtube channel at www.youtube.com/lilbubbub

Thank you. My dude read this to me and you can see it HERE

Thanks for all the questions, support and positivity. BUB and I are pretty pooped, so we're signing off for now. I'll try to come back and help her answer some more of these in the future.

We filmed some video responses that will be on www.youtube.com/lilbubbub later this evening.

You can learn more about BUB in VICE's documentary Lil BUB & Friendz which is now streaming for free in its entirety here: http://www.youtube.com/watch?v=gci3ouqUQHI

And you can check out new episodes and shorts featuring the one and only BUB here: www.youtube.com/lilbubbub

And finally, if you know how to read and like to do it, you can pick up her book in a book store or order one here: http://www.lilbubslilbook.com/#preorder

As always, a portion of all proceeds go to helping animals and need. And it's much more than you think. Believe or not, after working on BUB stuff for about 80+ hours a week for the past year, I'm still pretty badly in debt and 5 months behind on rent at my studio and my apartment.

But... I have the coolest job, the coolest cats, and the coolest friends on the planet. I do believe that my hard work will eventually pay off, and when it does I sure as hell am not going to feel bad about it.

Thanks, mike and BUB

Thanks. I have big news regarding the ASPCA. It's not 100% figured out yet, but it's happening. We are partnering to create Lil BUB's Fund for the ASPCA, which looks like it may be the very first national fund specifically created for special needs pets such as myself. More info soon ok?

GOOD JOB ME and ASPCA.

Hi. You are mine. GOOD JOB PLUMHEAD27.