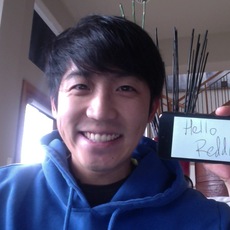 I am Jimmy Wong, actor and musician. I played Fred Chu in the film John Dies at the End. AMA

Here are the answers from the last AMA that got taken down:

Q: Ok Straight up, please let us know what the deal is between you guys and Brandon.

Freddie: Here it is, straight up: After three years of doing YouTube shorts, we wanted to do different things (kinda boring I guess). I wanted to work on VGHS as well as building RocketJump. I actually don't work in the same building as him, but I believe he has some long-form stuff he's working on as well. We explain a bit here too: http://www.youtube.com/watch?v=diVBqGBKtBs At the moment, we're both putting things up on the main channel. Brandon will be taking over youtube.com/brandonjla (formerly freddiew2)

Q: What's the most embarrassing story about Jimmy Wong?

Freddie: JIMMY WONG ONCE STUCK A PEBBLE UP HIS NOSE AND CRIED UNTIL MY MOM TOLD HIM HE JUST HAS TO BLOW HIS NOSE TO GET IT OUT.

Jimmy: As a child, I used to take the firework Poppits and unravel them all into one giant napkin poppit. I would sit for hours and take apart 4, 5, 6 boxes of poppits until I had a giant mini bomb in my hand. Freddie and our neighbor Joe decided to prank me one year by making a duplicate poppit out of rice and napkins, making it look identical to mine. Like a scene out of a movie, Freddie and Joe ran in front of me holding their fake poppit and taunting me with it. I started to scream and panic and tears were streaming down my face as I ran after them outside pleading for them not to ruin my prized work of Poppit-art. They ran to the middle of the street and chucked it onto the ground and it exploded into rice pellets everywhere. I was pretty embarassed.

Jimmy: if you're in the SoCal area we will definitely need use of background talent on many different occasions. We'll post all the casting info on our Facebook pages (freddiewspage, rocketjumpdotcom, and videogamehighschool) and Twitters (fwong, rocketjumptweet, vghs) so if you pay attention you can get on camera! All of our fans in the stands from last season were from our online casting calls, and some of them got significant camera time - so you can too!!

Q: Who would be your favorite person to collaborate with?

Q: What will happen to VGHS season three if, god forbid, you don't reach your taget on indiegogo?

Freddie: We did flex financing for Season 3 for a reason - it's because it's not exactly the same situation as Season 1 and 2 - we're basically using IndieGoGo to help out with the post production side of things. Worst case scenario - we cut back on some of our action scene blocking and take on some of the VFX in-house, etc. to lower post costs. The show is still being made (I'm goofing off in the middle of the table read right now).

Q: Why did you guys decide to end VGHS after this upcoming season?

Freddie: A bunch of reasons, but a couple main ones: Don't want to get stuck doing one series - wanted to do more and a variety of them. All our actors are SUPER GOOD and also getting older. SUPER GOOD means that they're constantly getting other gigs on TV and movies. Worse case scenario means one of our leads will get put in a TV show, which would mean we would have to recast, which would totally suck.

Q: Finally! This is the first time I'm on time to an AMA. How difficult is it for you to produce videos such as VGHS without funding from any major film studio? Also, when will you back back on LAN Party?

Freddie: Super duper difficult. That's a big part of trying to figure out the business end of things - it's easy if you're just one or two people with a camera, but we're a bit bigger than that at this point. We're currently sustaining ourselves with a mixture of ad views, brand integrations, and income from other sources like merchandise. As for LAN Party, not for a bit - too busy with Season 3 and other series!

Q: would you rather fight 100 duck sized horses or 1 horse sized duck?

Freddie: 1 horse sized duck with a gigantic loaf of bread.

Q: Has there ever been a video you uploaded that you thought wasn't really worth the effort put into it?

Freddie: No - to be honest everything we do we like for different reasons. Granted, those reasons may not necessarily line up with 6 million other people's (This video, for example, is still one of my favorites of all time -http://www.youtube.com/watch?v=OsxEutwS8X8)

Q: Just a question for Freddie, How closely do you still work with Brandon/Sam/Niko? From what I remember, you all used to share the same office space, has your success with VGHS changed that at all? Super keen for the new season!

Freddie: We are all in a new office and everyone's pursuing their own projects. It's weird - it's kind of how the once super close knit YouTube community shifted - originally everyone hung out with each other (I remember a ridiculous late night diner meal with a crowd of people that would've made a YouTube personality fan's head spin), but then everyone got busy with trying to make sure they can keep doing this ridiculous thing for the rest of their life.

Q: /u/jimmywong What's your favorite part on working with RocketJump?

Jimmy: Probably watching things get done and getting swept up in the group energy when some idea or crazy thinking lifts off and everyone gets amped and starts brainstorming stuff together. That or playing Towerfall with everyone and screaming. Lots of screaming.

Q: Who is your favorite character from VGHS? And, which episode was the most intense to film?

Freddie: Easily easily easily Jumpin' Jax (he's like, the idiot on the team). The entire time you're wondering "How did this guy make this team? What is he ACTUALLY good at?"

Jimmy: I can guarantee you there is an episode this season (3) that will be the MOST INTENSE EPISODE EVER. It's gonna be nuts. Other than that I think the most intense episode was the arcade night in season 1 because it was our only night shoot... and if you watch the Behind the Scenes, we all go crazy by the end of it.

Q: So Jimmy, question for you! When you were singing these lyrics: "Cause what they're really doing on those Friday nights Is showing me how to cook and dress 'Cause baby I wanna take you out And blow your freakin' mind" Did the end result of all that work end up as Feast of Fiction? Because if so, I need to ask my family on how to do all that too! Thanks for being such an awesome representative of the Asian community, it's hard to find notable people who are easy to relate to for me!

Jimmy: Hey friend! That end result kind of did end up as Feast of Fiction!! Great call, no one's ever made that connection before. Freddie and I were sitting around one day and Freddie had the idea, so I executed on it, and here we are now with Feast of Fiction!!

Q: What's a reference or cameo you've always wanted to put into VGHS but just couldn't fit or make sense in the script?

Jimmy: This is the only one I heard from side conversations about what could be - Nathan Fillion playing Law's Father. Well... kind of. Matt told me about an idea where we'd reveal Law's father in a flashback of sorts, and the camera would whip over to reveal it being NATHAN FILLION. Then Nathan Fillion's character would say something... he's actually the BUTLER to Law's father, the camera then WHIPS OVER and reveals BRIAN FIRENZI BUT WITH A MUSTACHE. So Brian would play his own father essentially.

Q: What are your favorite kind of cookies? PC, xbox or PS What for vacuum cleaner do you have? Battlefield 4 or Battlefield 3? Coca cola or pepsi? And the most important question of them all.. Tits or asses.

Q: Sudden death Super Smash Bros. Brawl.... who do each you choose?

Q: What are your plans AFTER VGHS? Any new series come to mind?

Freddie: We have about 5 or 6 series, ranging from more serious drama, to straight up action. It's more a matter of how we finance these series which will help determine what comes next, but rest assured - there's a lot of really cool stuff we're excited about.

Q: Jimmy, is this you in the new season of Top Decking with Boogie2988? http://www.youtube.com/watch?v=__rcjy980QI

Jimmy: Yessir. I know all the guys at Webisodes Network and we did a fun talkshow called AFK last year and will probably be doing more soon. They're great!

Q: Does Jimmy Wong have any weird habbits that are laughable ?

Jimmy: I hoard weird things like boxes to items that I don't need the box for anymore. For some reason I think that if I ever move, I'll want the original box to put stuff in, cuz like, ya know, the box was made for that item!

Jimmy / Q: This comment was deleted for some reason but it was about favorite animes! here's my answer:

Jimmy: When I was young I first watched the craziest stuff like Neon Genesis Evangelion, then as I got into middle school I loved sappier stuff like Love Hina and Ah! My Goddess. Past that I loved Cowboy Bebop, and I started watching every Miyazaki movie obsessively after an amazing chance theatre watching experience of Princess Mononoke when 3-4 moms gasped and dragged their kids out of the theatre since they thought it was another "Disney princess movie". My favorite Miyazaki movies in order: - Princess Mononoke - The Wind Rises - Castle in the Sky - Spirited Away These days I am really into Attack on Titan, and I consider myself pretty dang boss at the Fenglee Unity Game.

I've been with Ted for 3 years now, and the scene was just written so perfectly well. Even reading it I would always tear up or get on the verge of tears. I held that emotion bottled within me til we filmed, and just tried to be as honest as possible.

Joe Penna has an incredible mystique, one that cannot be defined by mere text on a Reddit AMA. His fingers, faster than lightning, his editing skills, unparalleled. Will we ever see anyone rise to the challenge of taking over MysteryGuitarMan's utter dominant grip on the world? I fear not.

Horse sized duck. Give it a loaf of bread, stab it in the heart while it's distracted, game over.