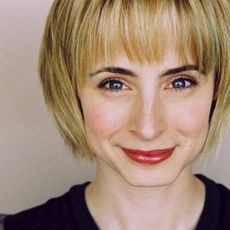 I am Whose Line is it Anyway improviser and TV writer Heather Anne Campbell IAMA!

Why, is Wayne known to choke a bitch?

Yeah man PM me and I'll do it.

Hi Julian! I'm a former SNL writer who penned some jokes that parodied your predicament -- including one you've re-tweeted as a meme. Now, you're probably going to have a large number of serious questions. I'm here to ask: What are your favorite pieces of fiction? And if you got a day out to have a good time, where would you go and what would you do?

Thanks! I have another one coming up on the 6th of August. Please be excited!

I feel like you just stepped out of the shadows of an alley, hat worn low, and nodded. I don't know who you are, but I'm happy you stopped by to say hi.

I think that big plastic tube did some phenomenal work in Prop Tag.

I owe both shows in some way to Drew Carey. If he hadn't cast me in Improv-a-Ganza, I doubt I would have had the confidence I had in my Whose Line audition. It changes your life when someone believes in you. I probably would have thrown up if I'd known how much that one afternoon audition for IaG was going to mean.

I'd actually performed with everyone except Wayne before; Drew Carey's Improv-a-Ganza was where I really had to deal with the shock of performing with improvisers that I grew up watching on TV. And we did DCIAG in front of a Vegas crowd, too, at the MGM. After that, Whose Line felt like a reunion of sorts.

Truth be told, the set itself was the most intimidating part of being on Whose Line. When you grow up watching SNL, and imagine yourself on the show, you imagine it'll be with the people you're watching on TV right then. Like Will Farrell or Jimmy Fallon or whatever. But when you get there, it's all strangers and the set looks a little different, because SNL changes all the time. With Whose Line, I ran onto the stage of my childhood, and the same people were sitting there. That was when it hit me. So insane. Really a dream come true.

Intimidating isn't the right word. It was awesome, in the moon-walking sense. I felt awed.

If I write about games, it's only going to be when one really strikes me. It was soul destroying to play terrible games to completion and then write an article about the few good things I could find in an otherwise terrible RPG or whatever.

I think the last two games I've written about were Dark Souls and The Last of Us. So I'll write about games as often as game companies can produce content of that caliber.