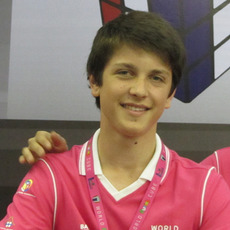 What the fuck did you just fucking say about me, you little bitch? I’ll have you know I graduated top of my class at royal institute of cubing, and I’ve been involved in numerous secret raids on MIT cubesat, and I have over 300 confirmed solves. I am trained in the Fridrich method and I’m the top cuber in the entire US armed forces. You are nothing to me but just another target. I will wipe you the fuck out with precision the likes of which has never been seen before on this Earth, mark my fucking words. You think you can get away with saying that shit to me over the Internet? Think again, fucker. As we speak I am contacting my secret network of spies across the USA and your IP is being traced right now so you better prepare for the storm, maggot. The storm that wipes out the pathetic little thing you call your life. You’re fucking dead, kid. I can be anywhere, anytime, and I can solve cubes in over seven hundred ways, and that’s just with my bare hands. Not only am I extensively trained in the 3x3, but everything from the 2x2 to the 7x7 you little shit. If only you could have known what unholy retribution your little “clever” comment was about to bring down upon you, maybe you would have held your fucking tongue. But you couldn’t, you didn’t, and now you’re paying the price, you goddamn idiot. You’re fucking dead, kiddo.

One horse-sized cube. It would only take about 55 turns to solve, and a duck-sized cube would take longer than normal anyway.

Yeah, every few months or so. I use differential oil. Most 'speedcubers' use 'speedcubes' - which are non-Rubik's brand, and are designed for quick turning. They're actually cheaper than the ones you buy in stores.

Yeah once, it was really weird. I was getting off the train after school, and one of my friends said 'cya Feliks'. Next thing I know, this middle-aged man asks me 'Are you Feliks Zemdegs?'.

a lot of critics

I'd tell them to read the rules. As long as the angle is less than 45 degrees, then the cube is considered solved. any more than that, and it's a 2 second penalty

The method I use is CFOP (Cross, F2L, OLL, PLL) I only use 2 algorithms to solve the cube, and this accounts for about 1/3rd of the solve. There are 55? algorithms for solving OLL, and 21 for PLL. On each solve, I encounter one case each, and have to use the corresponding algorithm. It's a lot easier done than said, and I'm not the best at explaining these sorts of technical things.

The best guide by far is at www.badmephisto.com He has tutorials for CFOP and for those who are learning for the first time. Anyone can learn, it just requires patience.

Haha, it's a decent conversation starter I guess, but I avoid bringing it up myself, it's always someone else. I generally try to avoid talking about it at parties and stuff, just cause I don't want to be seen as 'that cube guy' - but it's hard to avoid. Generally, people are pretty fascinated by it.

edit: Yes, I got the joke when I read it.