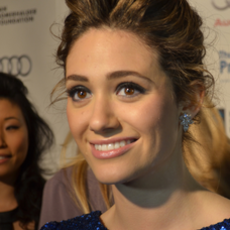 About
is an American actress and singer-songwriter. She has starred in movies including Songcatcher (2000), An American Rhapsody, (2001) and Passionada (2002). Her role in Mystic River (2003) garnered her wider recognition.
Reddit AMA Stats
Tag Cloud
actress, singer

Emmy Rossum here...you may know me as Fiona Gallagher from Shameless. AMA!

Hi there! I love Steve. He's one of the funniest dudes I know. Would be fun to meet someday! xo Emmy

HAHAHA! Because it's such a terrible movie! LOL!

The best thing that came out of it was I met Justin Chatwin, who's become one of my greatest partners in life, and I wouldn't have given up that experience for the world.

We were stuck in Mexico, in Durango, for MONTHS and MONTHS. And my only entertainment would be going to the local Wal-Mart, getting drunk, and buying DVDs of any American show i could find. The only one i could find was Nip/Tuck. So I watched all of it while filming DRAGONBALL in Mexico. Thank God Justin was there to keep me sane.

But I wouldn't call it a regret I made the movie. It's just not very good. I don't really regret any career choice I've made. I've made them all and learned from all those decisions. Even if they were mistakes, or regrets, I call them "choices" and make different ones in the future.

You guys! Go easy on the guy!

How about a drink first?

Are you kidding? I was a WRECK. I was completely panicked after getting the job. I was so nervous I'd mess it up for the fans and never be able to compare to SB. That said, I think I made it my own and I'm really proud of it :)

You and my mother.

Yes. It changed my perspective on female beauty, because Fiona isn't a very glamorous character, yet most fans see her as really sexy, so to play a woman on TV who doesn't wear a lot of makeup or fancy clothes, and to have that seen as a desirable woman is a really positive thing.

Also we get to go into all of these neighborhoods in Chicago that are so different from how i grew up in NYC, and the West Side and the South Side, which are lower-income neighborhoods that have a lot of violence in them - the people that we meet in those homes are remarkably gregarious, kind, fun, welcoming, warm... so it's very different than I might have thought of "The South Side" or "The West Side" before I went there.

Yes. This year, I was doing a scene with Jeremy Allen White, who plays Lip, and in the scene, his character and my character are trying to remove my ankle-monitor that I got while I was in prison, and while filming the scene, Jeremy realized that I hadn't shaved my legs, so he decided to use the pliers that were a prop in the scene to individually remove my leg hair.