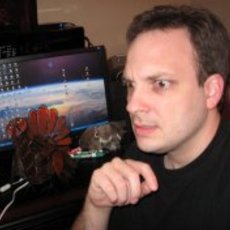 About
David Wong is the pseudonym of Jason Pargin, author of the humor and horror novel John Dies at the End. He is also a senior editor at Cracked.com, and has written a second novel, This Book Is Full of Spiders, which was published in October 2012.
Reddit AMA Stats
Tag Cloud
author

For those of you who have no idea what this is, or only know me as the Senior Editor at Cracked.com, in short there is a new movie starring Paul Giamatti and Clancy Brown out now that started as a short horror story I posted on my blog a decade ago when I was a random dude working for minimum wage.

To get from there to here, basically the story (with the preposterous title "John Dies at the End") became a viral hit in the mid-2000s, and then I got a few thousand copies in print for the odd person who wanted to pay money for it (I was working in a cubicle at an insurance company at the time). Then, via a grossly improbable set of circumstances, cult horror great Don Coscarelli got his hands on a copy and insisted on acquiring the rights to turn it into a film. This year the film was chosen to debut at the Sundance Film Festival, and you can watch it right now via your favorite streaming service or in theaters in a few weeks.

Meanwhile John Dies at the End was picked up for publication in hardcover by Thomas Dunne Books (a division of St. Martin's Press) and the paperback is now available in 18 countries, the last time I checked. The sequel, This Book is Full of Spiders, became a New York Times bestseller. And then I participated in this IAMA with Don and that brings us up to this exact moment.

A lot of men in suits are watching very carefully to see that he answers this correctly. DON'T FUCK THIS UP, SOREN.

What controversial opinion that you hold would do the most damage to your career and personal life if it became public?

Yes but I have a different book coming out first. If you're a fan of the books you can guess what the third JDATE is about.

There's nothing in place yet. Without having any inside knowledge of the situation, I'm going to take a wild guess and say that it might have something to do with how many people see JDATE.

Well when you read that opening in the book, you're not expecting it to pay off. The joke stands on its own - that Dave's memory of almost getting killed by this resurrected madman doesn't involve the danger but only the weird philosophical question it made pop into his mind. Think of how much it establishes about his character, and the way he thinks, and how numb to the insanity of his situation he has become. The twist ending of the book is a call back to that joke, but it's not like the joke stops making sense without the callback. It's just as funny as purely an example of how Dave's brain works.

Film is a different medium. And I mean completely different - it's like trying to write a song about a historical event. It's not inferior, of course - to keep with our metaphor, just as a song can't capture the exact timeline of events, it CAN do a better job of bringing him the emotion and experience of being there better than a cold telling of events. It's just different, it's a different format. Film has a specific story structure and length and a whole visual language of its own.

So the goal is NOT to create a page by page retelling of the novel (for that's just the movie that plays in your head when you read the book - you've already seen that) but to take what's great about the medium of film and create something that leaves you feeling the same way you felt when you read the book. It's capturing the essence of it, and taking you on a ride that goes to the same crazy places in your head.

I thought it was pretty close to perfect.

Side note: When I met the cast and crew at Sundance, the first thing anyone did was apologize for the gender switch of the dog, and there was much discussion about the logistics of using CGI to erase a dog penis frame by frame.