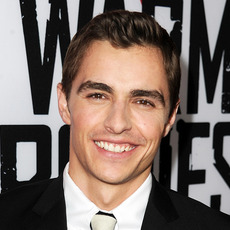 About
is an American television and film actor who is best known for his roles in the films 21 Jump Street, Charlie St. Cloud, Fright Night and Now You See Me, and on the series Scrubs. He is the younger brother of actor James Franco.
Reddit AMA Stats
Tag Cloud
actor

(chris) there is a more innocent side to mclovin that is similar to me, and more mature, darker side to mfer that I can also relate to.

(dave) i literally just copied your comment and forwarded it to my bro.

(chris) Jessica alba to both.

(dave) The most simple way to answer this is: I look like a fetus. I try to grow facial hair, but it sprouts out of my face in patches-- leaving me looking like a Chris Mintz Plasse- type. It's embarrassing.

(chris) thanks!! i saw kenney do a solo show at the roxy a few months ago, killer show, enjoy!

You ja made my day.

we just finished a movie called Neighbors (check out the trailer--it just went up!). and we're in the process of trying to remake "Stuck On You."

My first reaction was to not even tell her about it. We had to hold filming for 45 minutes until she got to set. LOVE MY MOM - chris

(chris) I didn't feel any pressure, it was really just the question of "will I work again", and have been very lucky so far!

(dave) It's definitely been a struggle... as much as I love and respect him and am proud to be his brother, I've been doing everything I can to stand on my own feet... maybe, mayyybe one day, one person miiiight approach him and say "hey! You're dave franco's older brother!"

Sex scenes are always uncomfortable, but Aubrey was an incredible sport about it all. She had to shoot a whole god damn movie with sex scenes! - Chris