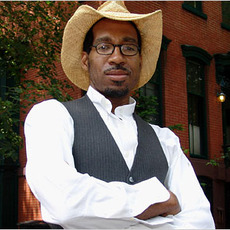 Hi, I am Claude Coleman Jr., the drummer for Ween, Eagles of Death Metal and my group amandla. I'm promoting an indiegogo campaign to raise money to record my 3rd album, and I'm doing an AMA today 1-3 eastern. Please besiege me with your inquiries...

I am Claude Coleman, Jr, drummer for the group Ween, promoting a fundraiser for the development of studio space facility and cultural landmark for the city of Asheville, NC. AMA!

Oh heyl no way - I'm NY. I get the whole sweet savory thing, but no man/woman, no. It's also the only fruit used so commonly like this - why not a Kiwi pizza? Or a strawberry pizza? Because they suck that's why and some fool convinced a million other fools that this tastes good. Pineapple Pizza is the Donald Trump of pizza

Hi Asa - you're very welcome. I don't think it's any kind of secret how things transpired when Aaron broke the band up. Every one understood the motivation behind the decision, but yea, the way it went down was tad bit abrupt and with little warning. It was like, your wife/husband deciding to break up with you on tv, and your phone blowing up for hours on end with your friends directing you to your husband/wife's interview where she/he is explaining to someone that they're no longer your partner, then by the end of the day, it's on CNN.com. The following day you're looking at a Spin.com timeline of your 25 year career - it was a bit surreal, a bit harsh, but everyone understands his decisions, and I along with everyone wishes the best for him. Ultimately it was a catalyst for some needed change of direction in my life.

Alrighty then - let's do this! http://i.imgur.com/lGOFtDs.jpg

My band Skunk in '89 was getting signed to TwinTone Records(Replacements, Soul Asylum, Babes in Toyland). I had a bit of a career before I knew them. Andrew Weiss was Skunk's producer, he got us close with them as he was releasing their tape records on Bird O' Prey. Crucial Lip and all that. When our A&R came to see us play for him in our bass player's parent's basement, we had Ween open for us. It was just our two bands, and our A&R to TwinTone. After our informal sets he signed Ween on the spot. Skunk went on to do two records, then I found myself eating lots of acid sleeping on the couch at the Pod with shit to do. The flies, man! Eventually Kramer from Shimmy Disc prompted those guys enough to lose the tape deck. I was a drummer on their couch so... we started doing gigs as The Ween, eventually leading up to right now.

Howdy - hmmmmm that's a troublesome one, the 'my favorite' question, that might the #1 of all time. I'm a songwriter so my favs are the more song-oriented tunes Like She's Your Baby, everything off the country record for instance. For me great songs are more a joy to play drums to vs a tune filled with cerebral craziness. And those songs get the biggest reactions too. When you hear Gener do Birthday Boy by himself, it's worthy of ovation -

Nothing in the pipeline as I know it. I'm holding out myself!

Josh Homme is obviously a brilliant fucking dude and a pal and the internet is no place to slander a friend - even if he were a dick. Plus the dude is the size of fucking Ohio and would knock a dude out from here to Saturn. I hope he's not coming for you right now.

Living with brain injuries is a silent torment. I appear to be fine, but I live with chronic, at times debilitating pain that hasn't left in 12 years. The entire left side of my body is numb with affected sensation; in cooler weather it's always freezing, and warmer temperatures that side sweats constantly, and I have about 13% paralysis along the left side. So with that, my spacial relationship to the drumkit is really challenged. Until I acclimated to the loss of sensation and the paralysis, for several years I would routinely smash the living shit out of my l left hand, just about everywhere on the kit, from mis-judging distances. My body would cramp up horribly, I'd walk off a gig limping like I fell from a plane with no parachute.

I've learned to work through it all - I have to warm up now to get the brain connections strong, and to loosen the paralysis a bit. I've learned to use my eyes a bit more with playing rather than with a feeling that isn't really there. And I've moving things closer in to my body. I do yoga, and get massages frequently.

Drumming became very second nature to me, now it's more like third nature - it's still natural to a degree, but I do have to put a little more thought into it. The best approach to it I've found, is to not even think about it, and just play, play, play.

Awwww that's such a beautiful story, I would've done the same. You were six years old?? Shit, I'm an old coot. But I love the stories about generosity, love and decent compassion within the insanity of the shows. You don't have to be an asshole to be punk rock.

Um, thanks for the compliment on my positivity - I'm a black man but I can still blush.

I read a lot of Buddhist writings, particularly of the teacher Pema Chodron. In her writings I've found amazing tools and lessons for helping to keep you fluid, rolling with the shit that life throws at your head. It's I guess a matter of acceptance of that stuff at the same time not allowing it to become a hinderance to the open-ness that I believe is in everyone's heart. I'm a very strong believer in you get what you give, and you are awarded with your hopes and dreams if you have unending gratitude and compassion for everything around you. It's pretty simple. Plus I thoroughly enjoy being sweet, decent and fucking kind. That accident wasn't negative - it was one of the greatest gifts I could have every received.

You are most welcome - best of luck with you and yer pops' band!

I honestly can't speak for their relationship. Bands are like polygamy - almost literally so. Sometimes break-ups need a cool down period. Sometimes they regain companionship - sometimes they're enemies until the end of time.