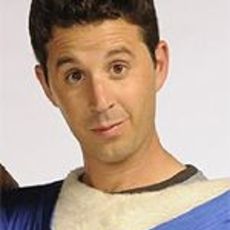 It wasn't that hard once they found I wasn't touching them.

My opinion is, I wish we could've shown boobs. I think it's a good thing that we didn't though, because I personally want to break the record for most boobs shown in a movie. Does anyone know what that record is? Like, literally, how many boobs were shown in the movie that showed the most boobs? So I guess, yes, there will be boobs in the movie.

Oh yeah, Mudcats! So I'm guessing you're from North Carolina? Love it. Love that you asked me this question, because now I have to tell this story and it's the only organic way it would come up. So, my brother, Jon Romano, who lives in Washington D.C., shit his pants, awake, until he was 13 years old. He used to hide his shitty underwear all around the house. So flash-forward to when I'm 18. I move all of my stuff into my dorm room, who I share with a guy I don't know. It's the end of August and the heat is unbearable in our dorm. We wake up in the morning and can both smell something horrible in the room. After much investigation, we couldn't seem to find out where the smell was coming from, so that smell lingered in the room the entire day. We woke up the next morning and the smell was even worse. So again, we scour the room looking for the smell. I walk over to the bean bag I brought and smell it. Lo and behold, that horrible smell was coming from the bean bag, so with my new roommate beside me, I unzip the bean bag. Inside the bag there must have been 15 to 16 pairs of shit-filled underwear. We both gasped in horror. He turns to me and says, "why would you hide your underwear in a bean bag," and of course, I am saying, "no, no, it was my brother," and I tell him how he shit his pants until he was 13. I told him my brother used to hide his underwear everywhere, and I was finally finding out what "everywhere" meant. And... go Mudcats!

I have no idea how to act.

Yes, I have, and I always put my face in it, just so people don't think I'm sending somebody else's dick.

Let's just say I smoked a lot of weed and watched Game of Thrones... fuck you, Joffrey!

Marathon Monday, because it was amazing to shoot with Jay Chandrasekhar. The jerking off story came from a real story of mine, except I told the guy, "I will suck your dick."

Alan took a shit in my trailer and left the toilet paper all around it. To get him back, I took a shit in his and turned the heat up as high as it could go and shut his door.