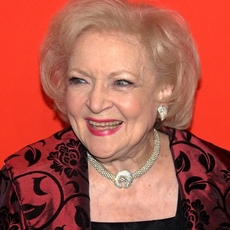 About
Betty Marion White is an American actress, comedian, presenter, singer, author, and television personality. In 2013, the Guinness World Records awarded White with having the longest television career for a female entertainer. To contemporary audiences, White is best known for her television roles as Sue Ann Nivens on The Mary Tyler Moore Show and Rose Nylund on The Golden Girls. Since the death of co-star Rue McClanahan in 2010, she is the only surviving Golden Girl. She currently stars as Elka Ostrovsky in the TV Land sitcom Hot in Cleveland, for which she has won two consecutive Screen Actors Guild Awards. She also hosted NBC's practical-joke show Betty White's Off Their Rockers, which resulted in two Emmy nominations.
Reddit AMA Stats
Tag Cloud
comedian, actress, singer, author, television-personality, presenter

I would love it if it were Meryl Streep or Julie Andrews but they would probably cast someone like Chris Rock.

Oh, because I'm childish at heart!

Rubber... Then you could be called Rubber Band.

Well at 92, that question gets pretty rough to answer. There have been so many special moments. One of the top ones was marrying Allen Ludden.

Oh, that's asking somebody with 9 children which is their favorite! Anything with a leg on each corner.

I love snakes too!