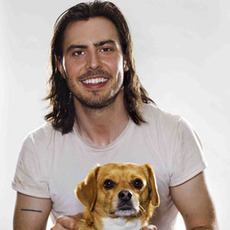 Andrew W.K. here. Ask me anything and let's party.

I'm Professional Partier, ANDREW W.K., and I'm back for my 2nd AMA!

Well, I'd like to consider myself your friend. So you have at least one friend. And it's perfectly OK to be painfully shy. It's also perfectly OK to have very few or even no friends. Not everyone has the same social needs as others. We see ideas of how someone's social life is supposed to be promoted on movies and in TV shows and by other people around us. But we can still be different and ourselves and sometimes that might involve not having a lot of friends. You can even be friends with people that you never talk to or even see - you just think about them. That's like a psychic friend. A lot of my best friends I almost never see or communicate with, but I think about them every day and feel very close to them. Some people might think that doesn't count or that those aren't real friends, but they are to me.

Don't worry too much about having friends and meeting people and just be yourself and party. Then friends will come on their own and everything will happen without even trying.

Wow. Well, thank you for asking about this.

That was pretty much one of the most intense experiences of my life. It's very hard to put into words exactly how I was feeling at that moment. Being on TV is always intense. And being on FOX News is even more intense. I was just overtaken by a certain physical flavor. I savored it and allowed it to wash over me. My facial movements were a bit loose. I'm not proud of how I looked, but it was an honest expression of how I was feeling in my soul. It is what it was. Or something.

They come from come. And partying.

Alright, I was 18 months old, almost 1.5 years on this earth. My mother had decided to take me to the birthday party of her friend's infant daughter, who was just turning 1 year old. We ate roasted egg, roasted cake, roasted pot roast, and melted milk. Ever since that fateful afternoon, I've been addicted to having fun. That's when I decided to become a professional partier.

Wow! Thank you SO much for saving that note after 10 YEARS!!! Was that from the Otto Bar show? I've been through Baltimore a couple times since then, but not nearly enough. We usually play in DC or other places. But Balt is one of the great American cities and I love it. I'll make sure we come party there again soon. THANK YOU!!!!!!!!!!

My favorite animal is myself and human beings in general. But beyond humans, there are so many animals that I enjoy. Fishes, birdies, doggies, hogs… the list can go on and on. I also like trotters, screaming beaks, and washed out frogs. And thank you for coming to the Austin show and for your extremely kind words.

Thank you SO much for partying with me on here for my 2nd AMA. I have to go party more now, but I will keep this thread alive and try and come back more this week to post more answers. If I'm able to, I'll post a reminder to my twitter that I'm on here again.

I cannot thank you enough for all your kindness and support and all your belief in the power of partying. We are making this together and I sincerely hope you realize how much you matter to me and to this whole feeling we're building. It is yours, it is ours, and it is growing.

Of course I remember! I have the figure he made right next to me at my desk. I will take a photo with it and post it up ASAP!

Yes, I love the Giant Eagle super markets very much. I've spent a fair amount of time in Cleveland, and even recorded a couple albums there. When I was recording my solo piano album ("55 CADILLAC"), we would go to Giant Eagle almost every day to get snacks and deli food. I just love the way the store smells and feels and everything about it. And the name GIANT EAGLE is a great name. Who wouldn't like a giant eagle? They're such party birds.

Thank you very much for your question. And thank you for even being familiar with my "Gundam Rock" album. For those that aren't familiar, the Sunrise Corporation invited me to record an entire album of classic Gundam songs (a Japanese robot animation franchise), to help celebrate their anniversary. I agreed and soon found myself on a voyage into previously uncharted musical (and linguistic) challenges.

If you look up Andrew W.K. and "Gundam Rock" on YouTube, you can get a sense of the songs.

I tried to be as faithful to the original arrangements and vibes of the songs, because they're so good. If anyone is familiar with the original Gundam recordings, I hope they can tell how hard I tried to maintain that original spirit. The beauty of those string parts, those brass parts, the drums, the vibes… you can't do better than that, so I didn't try.