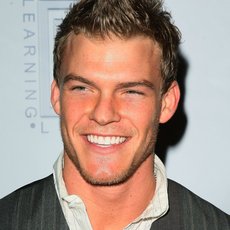 About
Alan Michael Ritchson is an American actor, model, and singer. He is known for his modeling career as well as his portrayals of the superhero Aquaman on The CW's Smallville and Thad Castle on Spike TV's Blue Mountain State. He was most recently seen as Gloss in 2013's The Hunger Games: Catching Fire.
Reddit AMA Stats
Tag Cloud
actor, model

Cuz she's a huge sloot and probs has nothin better to do than cook ham sandwhiches and shit in the kitchen and she probs has like too much arthritis from so much vagazzling anyway to sign a sweet poster with my gorgeous face on it.

We plan on picking up the story during Alex's senior year, but before Thad has entered the NFL. In the movie, Thad will be receiving a large signing bonus. What does Thad do with $50,000,000? You'll find out in this film.

Netflix was the first place Lionsgate went to after Spike decided not to renew the show. It's not out of the question, but it would have to reach a new level of success and popularity that we haven't seen yet. We are hoping that the movie is so big, someone would want to renew the show. The problem is, Netflix and others are into creating their own content. That means all they have to do is pay for the cost of producing the show, then stream it on their own platform. The reason they don't want to produce new BMS content, is because Lionsgate owns the show. They would have to pay Lionsgate a large some of money for the rights to produce a show, pay to produce the show, then give Lionsgate a large royalty for everything they make. This doesn't make sense for Netflix when they can just create and own their own content. It takes very little, on the other hand, for them to pay a small fee to stream episodes that have already been produced. We would love for the film to be such a success that we can keep making more.

If a girl: Get off the computer and get back in the kitchen. I'm starving.

Denise is extremely busy and we didn't want to commit her to potentially spending weeks signing merchandise. We are grateful to have her as a part of this cast but we felt it was a lot to ask. So we created a limited merch package for her. Her fans have a way to get a signature, but we didn't want to limit the amount of posters the rest of the cast was ready and willing to sign. Our goal is to make this movie, and we are prepared to do almost anything to meet our goal. But we respect that not everyone in the cast is in a situation that affords them that opportunity.

My favorite episode was Vision Quest. And my favorite scene was every one Thad was in, but not Coach Daniels, but Mary-Jo when Sammy wasn't with her, and Alex if he and Thad were being bros, but only when everyone was drunk.

Can I post the dick pic Romanski sent me this morning? It's gross though cause you could see poop in the pic.

Simply put, business... Spike is a very small network and couldn't afford to keep licensing the show. Shows usually get about 5% more expensive every season. It became too much for them.

No Harmon was born during the writing process after the show was created. He's one of my all-time favorite characters so I'm glad he showed up when he did.