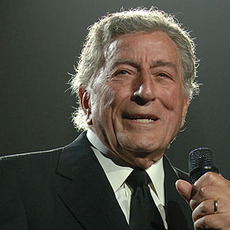 I am singer Tony Bennett. AMAA!

Singing in the Rain.

That's a tough question. I grew up in an era where the whole process of finding yourself was to become yourself. You might be influenced by some music, but you had to just be yourself, and if you became yourself you were just different than everybody else. But today everyone seems to be doing the same thing, and it hits me as a very eccentric age for music because they all look alike and are doing the same thing. But years ago, it was different, because just by being yourself you were different than everybody else.

I Left My Heart in San Francisco. Not only because it became the biggest song, but I still love the song. I have to perform it every night, and I never get tired of it. Being a jazz singer, I phrase it a little different every night. I love the people of San Francisco, they have been beautiful to me ever since the song came out.

About Sinatra, that story was true. He was a great friend of mine. He changed my career by saying I was his favorite singer. It made all of his fans pick up on what I was doing and I've been sold out ever since.

Well the best one I've ever worked with was Bill Evans. I did two albums with him, and they're the most prestigious albums I've ever made. Every piano player that I've ever met or interviewed all want to emulate him, trying to play as good as he plays.

Haha! That's the end of demographics.

It was wonderful. I was pretty frightened, I was given a summer replacement for Perry Como on television, and I was left with kind of a bare stage and a very small orchestra and very few special guests. And it was the first time I took a chance and met him backstage at the Paramount Theater for the first time. He heard that I was one of the new singers on the block, he was 10 years older than I was, but I was a big fan of his, and I took a chance on meeting him. When I went into his dressing room at the Paramount, he said "What is it kid" and I said "Well I am very nervous, I don't know how to stop being nervous."

And he gave me great advice that lasted my whole life so far. He said "The public if they see that you're nervous, they will support you, they will reach out to you, and when they reach out to you, just reach out to them." Never be afraid of an audience. If they are nice enough to come see you, they are fans. And he taught me that your fans are your friends, so that helped me so much that I was able to go through with it. And it stopped my being frightened of the audience. That was when I was brand new at the game.

I just want to thank my fans over the year. You've been so good to me and I hope that you like the new album with Diana Krall. We had such a good time recording it and stay in touch!

I consider that horrid. We're trying to do the opposite, my wife and I. We started with one school in Astoria, but now we have seventeen schools in the United States sponsoring arts programs. We hope to have them in every public school in the country eventually. Someday if we have more artists in the United States than anywhere else in the world, I think it would be very beneficial. The fact that our country will stay that much more healthy. The bottom line of artists is the search for truth and beauty, and by having that prevalent with our morals, that will keep our country very healthy.