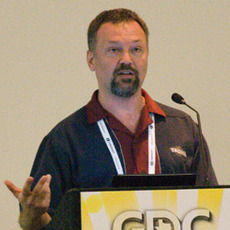 About
best known as the producer, lead programmer and one of the main designers of the 1997's computer game Fallout.
Reddit AMA Stats
Tag Cloud
designer, producer, videogames, programmer

We are Chris Avellone, Tim Cain, and Josh Sawyer from Obsidian Entertainment. AMA

Tim Cain: those rights are held by Activision Blizzard, who got them from a chain of buy-sell events occurring after Sierra closed. I have often thought of making a sequel to Arcanum, especially since Troika designed a sequel called "Journey to the Centre of Arcanum" back in 2001, but I don't own the rights and there doesn't seem much interest from the publisher to back such a project.

Chris Avellone nods at this very good idea. And he's not joking.

The issues with K2 are my fault, and no one else's. Looking back, I would have taken more care to focus on the elements of the game that mattered the most: the story and characters, and removed the mini-games, for example (those were a waste of time) and also cast away many of the cut scenes (they cost too much time to do technically, despite how much we liked them).

I also would have downscoped the cast and done what we've done on titles after that - made a smaller, more reactive cast and kept the central character pillars (Kreia, Atton, Mira, Visas Marr). I would have kept T3-M4, regardless.

Josh is right (I almost wrote "write" there). It's often the VO budget, not the will of the designers that limits the amount of reactivity text between NPCs in an area. As an example, the reactivity text in Fallout 2 I felt was far more true to an RPG than other games I've worked on because it was much easier pipeline-wise to implement it and while it wasn't free, it was definitely FAR less expensive than if someone had had to voice it. Also, it was easier to edit.

The TSLRCM (Sith Lords Restored Content Mod) and the superheroes that made that happen are to be thanked. A lot of the cut content was ressurected, and those guys are rockstars. I don't have a quick link to it right now, but maybe someone else does. If you like it, give those guys a shout out to your friends, they deserve it.

Yeah, there were two points where it broke convention because I felt it needed to - one was with Lanius, and the second was with Ulysses. If you kept spamming the Speech button and choosing the first option without really listening to what they were saying, you'd end up screwing yourself. The reason I don't feel good about that is because that wasn't the precedent set with other conversations, so I don't know if I'd do it again if I had the chance.

But in Project: Eternity, I definitely want to do this. People who don't care about dialogue shouldn't take Speech skills anyway - those that do should have fun exploring the conversation and seeing what they can take away from it.

Tim Cain: I am seething with animosity! No, seriously, that's fine. There were a lot of RPG's that came out then, so I don't expect that Chris (or anyone) has played all of them, much less all of mine.

Chris Avellone has a nostalgia attack:

Yes, and if you want to see more, they're on Twitter (@chrisavellone), too. I doodle on everything when I get restless. Or I'm on the phone. Or having beers and I've brought my sketchbook. I believe I did all the RPG Codex stick figure style trolls while intoxicated.

Tim Cain: Yes. Our intention is that you will level more slowly than many modern games, but each level will feel significant in terms of power level and new abilities. If you play like me, you will already be planning where to spend your points when you level up, so when that "ding" happens, you will upgrade your character and immediately look for someone new to fight/talk to/sneak past, just to try out the new abilities.