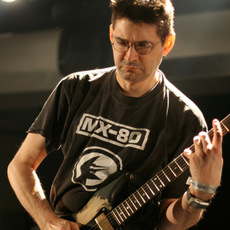 About
was a member of Big Black, Rapeman, and Flour, and is currently a member of Shellac
Reddit AMA Stats
Tag Cloud
guitarist, singer, musician, songwriter, audio-engineer

I am Steve Albini, ask me anything

I reject the term "piracy." It's people listening to music and sharing it with other people, and it's good for musicians because it widens the audience for music. The record industry doesn't like trading music because they see it as lost sales, but that's nonsense. Sales have declined because physical discs are no longer the distribution medium for mass-appeal pop music, and expecting people to treat files as physical objects to be inventoried and bought individually is absurd.

The downtrend in sales has hurt the recording business, obviously, but not us specifically because we never relied on the mainstream record industry for our clientele. Bands are always going to want to record themselves, and there will always be a market among serious music fans for well-made record albums. I'll point to the success of the Chicago label Numero Group as an example.

There won't ever be a mass-market record industry again, and that's fine with me because that industry didn't operate for the benefit of the musicians or the audience, the only classes of people I care about.

Free distribution of music has created a huge growth in the audience for live music performance, where most bands spend most of their time and energy anyway. Ticket prices have risen to the point that even club-level touring bands can earn a middle-class income if they keep their shit together, and every band now has access to a world-wide audience at no cost of acquisition. That's fantastic.

Additionally, places poorly-served by the old-school record business (small or isolate towns, third-world and non-english-speaking countries) now have access to everything instead of a small sampling of music controlled by a hidebound local industry. When my band toured Eastern Europe a couple of years ago we had full houses despite having sold literally no records in most of those countries. Thank you internets.

Long story, but basically the standard protocol for a big record company at the time was for players in the industry to try to claim authorship of a successful record somehow -- this guy did the A&R, this guy did the legal, this guy was the producer, this guy remixed it -- so credit for success stayed within the industry and players could use it as professional capital. Nirvana made a record by themselves, outside all that influence, and it made everybody inside uncomfortable enough to try to derail it and get them to do it over. Additionally, it's normal for any band to have some slight misgivings about their record once it's in the can, everybody does. The label put pressure on the band, partially using me as a publicity scapegoat, to get them to do the record over, and that coupled with their natural uncertainty eventually created enough doubt that they re-mixed a couple of songs.

I know the label was directly involved with blaming me because I got more than one call from music journalists who said, "I just got off the phone with Gary Gersh and he says the Nirvana album is un-releasable and it's your fault."

The record that made it into the stores is the one Nirvana wanted you to hear, and I'm content with that. I have no beef with Nirvana, they were a normal bunch of guys under extraordinary stress and they behaved normally. All the motherfuckers around them, all their functionaries and managers and label parasites, those petty little people who fucked with them to preserve their positions within the industry, fuck every last one of them.

When I first started making records I would sit in front of the console concentrating on the music every second. I found out the hard way that I tended to fiddle with things unnecessarily and records ended up sounding tweaked and weird. I developed a couple of techniques to avoid this, to keep me from messing with things while still paying attention enough to catch problems. For a long time I would read, but it had to be really dry un-interesting stuff. The magazine the Economist was perfect, as were things like technical manuals and parts catalogs. I had a stack of them by the console. It can't be anything interesting or with a story line like fiction because then you can get engrossed and stop paying attention to the session. It has to be really dull, basically so you are looking for an excuse to put it down and do something else. This has proven to be a really good threshold, so that if anything sounds weird or someone says something you immediately give it your full attention and your concentration hasn't been ruined by staring at the speakers and straining all day.

Lately I play Scrabble, and it serves the same purpose.

I was playing Scrabble the whole time so I don't remember.

1: I saw a guy turn down a beer once. 2: Dave is an underrated drummer. He's a good musician generally, but he's a monster drummer.

Because it sucks and I'm tired of hearing about it. Believe me I've tried. I just hate the parts I hate about it more than I like the little things there are to like. The batting average is just so low I can't bear the dead time between highlights being filled with all that noodling. It's vain music.

Man I feel bad I didn't get to everything, but I've got shit to do tonight so I have to cut it off for the moment. I can come back to this later tonight or tomorrow to continue. I'm humbled at all the attention, honestly.

1: Patsy Cline, Neil Young or AC/DC 2: No. I don't take royalties because I am ethically opposed to them as a means of compensation. I think they unfairly siphon money from a band who has earned it. It is patently ridiculous to work on a record for a couple of weeks in a secondary capacity and get paid for it in perpetuity. I prefer to set a price for my time and get paid like anybody else who works for a living. My wife on the other hand, she regrets my position on royalties. 3: No, not one favorite.

Sure. For anything that matters and I'll want to have around forever, I want a record. For casual listening I think streams are great. Super convenient both for listeners and bands trying to get their music out. If you're talking about money, then I side with the listeners. I don't think you should have to pay to listen to something. That just seems like a normal, decent position.