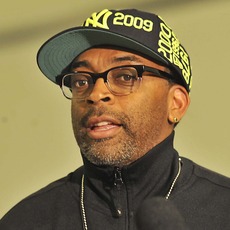 About
is an American film director, producer, writer, and actor. His production company, 40 Acres and a Mule Filmworks, has produced over 35 films since 1983.
Reddit AMA Stats
Tag Cloud
actor, writer, producer, film-director

This is the best question of the night. That scene you refer to in Malcolm X is a true story, and Malcolm said that was one of his biggest regrets that he told that young woman, a person like you, that there was nothing they could do to help the black struggle. He regretted doing that.

It was a mistake.

Before we started the shoot, Josh Brolin went to Park Chan-wook and asked for his blessing. He told Josh "you and Spike make your own film, don't remake ours." And that's what we did.

I spoke to the family and everything is cool. It was taken care of months ago. They hold no ill feelings towards me.

Yes, I love all of Giancarlo's work. I don't know how the show will end. But I will be watching.

It was March 20, 1988. I was having a birthday party in LA and E.U. was the band. And this is right after School Daze and E.U. had the number R&B hit with the song "Da Butt." And this lady was dancing crazy on top of a speaker, I told her to get down, because if she fell, her neck would be broken and I would be sued. So finally she jumped off the speaker and started cursing me out in a voice I'd never heard before. I asked her where she was from, and she said she was from Brooklyn. I said "where in Brooklyn" and she said "Fort Greene" which is my neighborhood. I said "What is your name" and she said "Rosie Perez." At the time I was writing Do The Right Thing, and that's when I got the idea to make Mookie's girlfriend Puerto Rican.

And that's my anecdote for tonight. The rest is history!

Well, we have made some changes. We have an African-American president. But here's the thing. A lot of people thought racism would be eradicated or disappear as soon as we had a Black president. That we would enter a post-racial America. That has not worked out.

The greatest player ever, Michael Jordan. It would be hotly contested though.

I think the one that people should see now is The Central Park Five by Ken Burns.