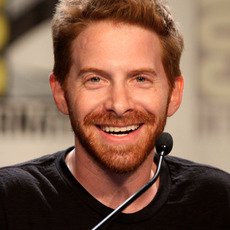 I love that movie! I think we suffered in theatres because the title was "Sex Drive" and no guy felt comfortable bringing this up on date night as the number one movie they wanted to see, and no girl was going to buy tickets for that movie, so I think we suffered. But it's actually a really well-made and very funny movie that I love, and it's definitely in one of my top experiences.

Well the first time I did Entourage it was a one-time thing and was not intended to be a continuing thing. Kevin Connolly who plays E and I have known each other since we were 7 years old and have always been friends, so the opportunity to play Hollywood rivals was really fun for me. And I saw it as a chance to parody every narcissistic self-consumed, grating, exhausting Hollywood celebrity that I had ever encountered in one part. Much to my surprise, people really believed that that show was a reality show, and I had to do some legwork to remind people that it was actually a joke / parody.

Of course it's not actually like that. That's why it's funny and not callous and mean for us to be making fun of each other. We actually like each other and have been consistently supportive of each others' careers and creative ventures, and are lucky enough to get to collaborate on each other's things.

You know I spent the better part of my career playing the affable stoner and "the guy in the van." I'm really interested in tech, but I'm not tech savvy. The reason I always got those parts was because I could speak tech-nerd gibberish like it was regular thought, and for that I thank basic Shakespearian training.

As a sidenote: when I got that part in Enemy of the State, it was at the same time that Austin Powers had blown up on DVD and I had just made Idle Hands (or just finished it), I was in production on Buffy, and it's one of those weird things when your agents want to help elevate you to a particular type of stature and when they can't get the particular credit deal that you want, their recommendation is that you go uncredited. I got asked to do that part, and it was a very little 1-2 day shoot, after they tested the movie the audience had questions about what exactly was happening to Will Smith's character and they needed cutaways to the guy in the van to explain what was happening and clarify the narrative. And so I became friendly with Tony Scott and they asked me to come do all that stuff and it turned into what looked like a much larger part. All of a sudden I'm the director of the task force and it's just so funny. It was a one day thing that turned into a character that had gone throughout the movie and we had already made a deal that it would be uncredited, and then it turned into something where people were like "why were you uncredited? Were you embarrassed of doing the movie?" but I'm a huge fan of Tony Scott and remain privileged to have gotten to work with him like that.

I really liked the technology that had been developed when BioWare first announced the engines and the type of game they were going to make. The ability to build a reputation for your character as you make all of these choices throughout this epic, many-hours-long game, that was really appealing to me from a storytelling standpoint and as an actor, I thought that would be a fun thing to be involved with. I thought it would provide a great gameplay and entertainment experience and that's really all I look for, a great entertaining experience.

My favorite thing about having played Joker is that I meet people who I have had a 80 or 90 hour very intimate experience with that I wasn't a part of! It's been really neat because I meet people and it's like we went through something together even though I wasn't there with them.

Close enough to be his backpack!

I am a huge fan of Community and very excited to see the new season with Dan Harmon back in the driver's seat.

I always go back to Voltron Breakdancing, it was in our first season and our fifth episode, we were still figuring out what was possible. The fact that we could make this iconic robot breakdance like a B-Boy was really sort of liberating. And it opened a lot of things up. It was the first time that we wrote and recorded a song ourselves, and got a character to dance on-camera, and if you look at everything that happened since then, we just took it and run with it.

I loved making that movie so much! If you watch that movie, it's the very true story of 3 boys falling desperately in love with each other during some of the most trying and challenging times of their lives. Both Matt Lillard and Dax Shepard who I knew before we started making that movie, they are so awesome and such talented and funny people and we were wholeheartedly committed to doing a great job on that. We were in New Zealand for 3 months and when you're on location that long and that far, you go a little crazy.

It started us with us flat-fist punching each others' arms and graduated by the end of shooting to one of us on all fours while the other flat-foot kicked them in the abs. Guys commune in different ways than women. But we are all still close. We just spent 3 months together running, jumping, climbing and swimming and for four straight weeks of that we were in our underwear so we went a little nuts. I really love that movie and it has a deep place in my heart. It was an awesome experience I will always remember.

BONUS STORY: both Matt and Dax are over 6 feet and I'm 5 feet 4, so when we went out places and local people at bars would want to talk to me or buy me shots. I don't know what it is but nobody wants to fight me because nobody thinks I will steal their girlfriend, but people want to do whatever it is to relax, they want to include me, whether it's doing shots or talking. So in everyone of those situations where we would go out, Dax and Matt both confided in me seriously that they prayed (separately) for a drunk soccer lover to pick a fight with me so that Matt and Dax could come to the rescue and basically kick their ass. They wanted the opportunity to protect me. But it never happened. I'm pretty good at diffusing those situations. I've met a lot of drunk people in my life, and I've turned that bomb into everyone doing irish car bombs.