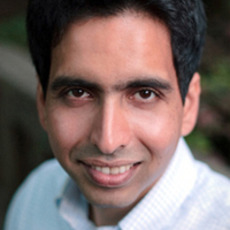 About
is a Bengali-American educator and the founder of the Khan Academy, a free online education platform and nonprofit organization.
Reddit AMA Stats
Tag Cloud
educator, entrepreneur, hedge-fund

I am Salman Khan founder of Khan Academy-AMA

I know it might sound cheesy, but I get a kick out of all of them. I won't make a video on a topic unless I think there is something interesting about it and I enjoy it. The reality is that most things are really interesting if you look at it the right way.

We do want to do those topics eventually. It might be me or it might be a traditional expert in the field.

I will definitely do much more advanced mathematics in the next year than what we have now.

Depends on the video. If I do an example problem in, say, algebra, I don't do any prep so it takes me about 10 minutes. If I am thinking about introducing a complex topic that I already know well, I think about it on my walk to work so it may be 30 mins -1 hour total. If it is a topic that I need to brush up on, it might be half a day. When I did organic chemistry, I spent 2 weeks immersing myself in the subject before making the first video.

Blocked name for privacy (although I think he is probably cool with sharing it):

Hi my name is ****** ** and I'm a second year student in the University of Western Australia (UWA) majoring in Physics and Maths. I was originally from Singapore where I spent the first 15 years of my life failing school, day after day I would not understand a word the teacher was saying as they said, "you must remember this or you won't get a job in your future." and every year I would fail school. When I was 14, I started failing pretty badly and fell into a world of drug addiction. When I was 15, my drug addiction got so intense that it affected my grades so badly that I had to be held back a grade in my high school in Singapore. Finally in January 2008 (the year I was 16), my parents decided to move to Perth in Western Australia. They had me enrolled in a private school where within 8 months I was expelled for fighting and drugs. At the end of that ordeal and closely evading arrest, my parents had me enrolled in a local public school where I was faced with the worst problem of my entire life. The final exam of high school that determines if you go to University or not was coming, and I had no idea what to do as I never listened in class since I was 13. All I could do was expand a bracket and that was it, no factorizing, solving an equation or doing trigonometry. I first met the Khan Academy in December 2009 where I stumbled on his videos on Complex Numbers on YouTube. I had a whole load of heavy weight subjects like Literature, Physics, Advanced Maths, Chemistry and Biology. Everyday when I came home from school, it would be a 4pm - 10pm study session driven by my own fears. With 5 years of work to catch up on and only Khan Academy helping me, it was a grueling experience. I failed every test and exam that year, thankfully none of those tests and exams contribute to your final University determination grade. I worked through the Khan Academy playlists on Basic Algebra, Trigonometry, Physics, Chemistry and Biology before moving on to the "higher level" things like Calculus and Differential Equations. Thanks to Salman Khan for quitting his day job as a Hedge-fund Analyst, he has allowed a drug addict whom the public would look down upon to persevere through his A levels and come out on the other side with a result good enough to get into Western Australia's best University. I hope and pray that the Khan Academy will expand to do subjects like Modern Physics and Maths topics like Topology, Differential Geometry and so on. In any case, I thank you Salman Khan, and the effort you have put into the Khan Academy. You've opened doors for us that we would have never been able to unlock alone.

We are very open to it. Email me. I really want to learn more about quantum computing myself! Have you tried to make any videos?

Hard question and I don't claim to know the answer.

We are trying to experiment with some inner city charter schools and the results seem to be good (to early to make any definitive statement).

I think giving the student ownership of their learning and not forcing them through content that frustrates them is a first step, but, by no means, is a complete solution.

All of my best teachers talked with the students rather than at them. They were also unscripted but had deep subject matter expertise.

EDIT: just added this verbal answer to this and many of the other questions: http://www.youtube.com/watch?v=2DVDI-HF4Eg

Yeah, it took some time to get the intuition for it. It would have been easy just to list reactions for people to memorize, but it only becomes interesting when you see the underlying themes.

We started with math because it is the core for so many other topics.

Expect to see questions on topics beyond math in the next year. things like physics, chemistry, finance, computer science, logic, and grammar.

For me, it started very incrementally. I always hoped that it would be "significant" to many people, but what convinced me to keep going was the positive feedback from cousins and the early people who bumped into the videos on YouTube. Figured it was worth doing even if it just helped out a handful of people. Everything else is gravy :)