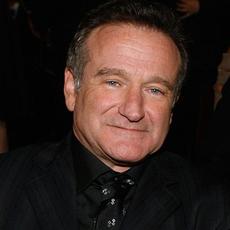 About
is an American actor, voice actor, and stand-up comedian. Rising to fame with his role as the alien Mork in the TV series Mork & Mindy, Williams went on to establish a successful career in both stand-up comedy and feature film acting.
Reddit AMA Stats
Tag Cloud
comedian, actor, voice-actor

Robin Williams. It's time for a convoluted stream of consciousness. Ask Me Anything!

UPDATE: I am taking a bathroom break!

UPDATE: I am back!

Oh my god, Jack Nicholson. He once was with me at a benefit and leaned over and said "even oysters have enemies." In a very intense voice. I responded with "Increase your dosage."

Dana Carvey does my personal favorite impression of myself. It's accurate. And kind.

It's more fascinated than scared. He says things that even Buddha goes "...what did that mean?"

For question one: If I could be greedy I would say both! To explore all aspects of comedy is part of the job.

My god! I have on nothing but Google Glass! And I'm downloading as we speak.

I think I only called him once, maybe twice. I called him when I was representing People for the Valdheimers Association. A society devoted to helping raise money to help older Germans who had forgotten everything before 1945. I remember him laughing and going "thank you."

I think I have a copy but I've never seen it!

But I love Cowboy Bebop!

Oh my god, Isaac Asimov's Foundation trilogy. It's one of the greatest books of all time, and the greatest character is The Mule.