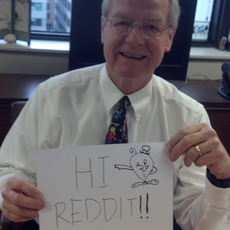 About
politician and administrator from Pennsylvania, and is a member of the Democratic Party.
Reddit AMA Stats
Tag Cloud
democratic, politician

I'm working to overturn Citizens United through a constitutional amendment stating corporations are NOT people and money is NOT speech. I’m suing the US Senate to break the gridlock and fighting to preserve a free and open Internet. I’m Bob Edgar,...

Your question gets at the heart of why this is such a tough issue. Of course groups of people have free speech rights – Common Cause is just such a group. And we’re not trying to silence anyone, corporations or individuals.

But we believe that it’s possible to regulate the volume of political speech, amplified by money, in a way that preserves the first amendment and allows everyone to be heard. We believe the people and corporations that put big money into our campaigns are investors; like all investors, they want and expect a return on their money. We’ve seen in past eras how uncontrolled political money corrupts the people – candidates and officeholders – who benefit from it.

Common Cause supports fair elections legislation, which has been implemented in Connecticut, Maine, and Arizona, among other places. In these states, candidates who agree to refuse corporate and union gifts and limit the amount they take from any individual, receive grants of public funds that allow them to run competitive campaigns. The Fair Elections Now Act, which has been introduced in the last several Congresses, would put such a system in place in Congressional elections.

GREAT! By the way, Common Cause has openings for Interns and Volunteers all year long. Please check out our website to see some of the issues we are currently working on. www.CommonCause.org Tracy Leatherberry will help you get connected. [email protected]

You're absolutely right. That's why redistricting reform is a major Common Cause priority. We were the driving force behind California’s adoption of a non-partisan redistricting commission, which in 2011 drew new districts that have been widely recognized as free from partisan taint. We’re working to create similar commissions in other states too!

I'd argue that you already do pay to support ideas/services/policies/laws that you disagree with. If we had publicly funded campaigns, members of Congress would be much more likely to look out for the best interest of regular people than their special interest campaign donors. That would translate into things like lower prescription drug costs, better clean air laws and tighter regulations on the people who ran our economy into the ground.

you already do pay to support ideas you don't agree with. Most members of Congress take office beholden to special interest donors who want -- and often get -- something in return. Think of Congress passing a Medicare drug bill a few years ago that essentially kept drug prices higher than they needed to be. If we used public dollars to fund elections, elected officials would take office beholden only to constituents and you'd be more likely to see policies like better clean air laws and tighter restrictions on the people who ran our economy into the ground.

We want the same rules for Unions and Corporations. DIRTY MONEY IS DIRTY MONEY...

There are two key differences though: corporations spend much more on politics than unions do, so the distortion is much greater, and more importantly, unions are already required to disclose their spending.

The People's Pledge in Massachusetts was very effective and we should seek to replicate it throughout the country, but we must also realize its limitations.

The People's Pledge worked so well in Massachusetts because both candidates bought into it wholeheartedly, and the high profile nature of the race made it political suicide to bow out once the agreement had been made. Without these circumstances, the Pledge may have seen a very different fate.

That shouldn't stop us from petitioning future candidates to follow suit, but we can't let that pursuit take our eyes off the prize either. We need a constitutional amendment so we can place legal, not voluntary, limits on political spending by outside groups.

There are laws already on the books that prevent corporations from using employees or consultants to funnel money directly to candidates. We can pass similar laws to stop them from funneling money to PACs. Common Cause also backs strong campaign finance disclosure laws, like the DISCLOSE Act, that would make all political spending transparent.

Without a doubt, the biggest hurdle is big money. our campaign finance system is badly broken.

Running for elected office at all levels of government is so expensive that candidates need to rely on big donors and special interests to fund their campaigns and get them elected.

That makes they take office beholden to donors. Citizens United made a bad situation worse.

The good news is that we're working to fix this problem, here's a statement we just released on three bills before Congress right now.

You are exactly right. Elected officials from both sides of the aisle are guilty of putting their campaign funders and fundraisers ahead of the interests of regular people because they need these donors/lobbyists to win re-election.

I believe elected officials on both sides of the aisle take office for the most part with the best intentions to represent voters. But we have a broken campaign finance system that nearly forces them to choose donors over constituents.

I think many members of Congress know in their hearts that this is true, and this is the situation. Unfortunately, many are reluctant to change the system because they have already mastered it.