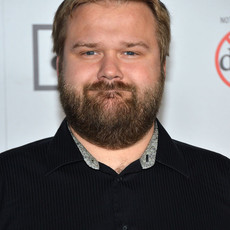 About
is an American comic book writer best known for his work on The Walking Dead and Invincible for Image Comics, in addition to Ultimate X-Men and Marvel Zombies for Marvel Comics.
Reddit AMA Stats
Tag Cloud
comic-book

I’m Robert Kirkman. My new show Outcast starts next month. Ask me anything!

ABSOLUTELY NOT. Although when I look in Andrew Lincoln's piercing blue eyes I FEEL safe.

I just want to point out that a lot of what you seem to hate about the finale are your assumptions of how season 7 will start. The death will have no impact now, etc. I assure you it will. You're welcome to be unhappy with the episode that aired. Was it a misstep? Maybe. Only time will tell.

Also, there's a lot of assumptions about why we did what we did, "ratings grab" which also isn't true.

That said, I love you for watching 6 seasons of the show and reading the comic. I appreciate the support up to this point and I'm sorry your unhappy. Standing by our decision doesn't mean I think you're immature in any way or wrong to feel the way you do. I just know how much the fanbase is treasured and respected behind the scenes so it bums me out when people make a lot of assumtions.

Scott Gimple is a great guy who EVERY FAN would love if they could get to know him. And he LOSES SLEEP trying to make the fan base happy. It may not seem that way, but it is. He loves the comic as much as the die hard fans of the comics do, he was a die hard fan of the comic before the show existed.

Hopefully you'll like season 7 better. If not... may I recommend OUTCAST... or Game of Thrones... or The Americans... or Better Call Saul. There really is a LOT of amazing television to choose from these days. I really liked Bloodlines on Netflix. And if you like animation, RICK & MORTY is the BEST THING BEING MADE THESE DAYS.

Secondly, Scott Gimple is a huge Goldeneye fan and is angry that you called the game "shitty."

In my opinion, I feel like characters ripen like fruit. So while I wouldn't say the more popular a character is the more likely they are to die, they do have to reach a certain level of popularity before they've "earned" the death.

No character is too popular to die. (Suck it, Reedus!)

I promise this never happened.

Embarrassed that I totally missed your joke! My favorite flavor of ice cream is Negan killed Carl.

Forever. He wears so many layers of clothing a zombie bite would never get through.