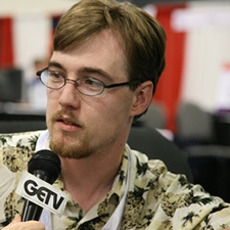 I always felt our role was to be the most curated. To try to be consistent. We might be a few hours behind reddit, but you can read 10 Slashdot stories at a certain quality level, where reddit or digg you would read 100-200 items in the same timeframe... but the quality bare would fluctuate wildly.

Basically, consistency over speed. Which is frankly a fair consideration.

'First Post' was actually really irritating to me, because there would be a dozen or more of them on many articles. This made the REAL discussion a significant hunk of scroll away to read.

A number of users wrote bots designed to get the First Post, which created a lot of unnecessary load on our servers in an era when we were pretty starved for resources.

We solved that for a few years by writing a script that posted an automatic 'First Post' to stories before readers actually saw it. And then a few minutes later, we would remove the robot created post.

This worked for awhile, but then readers started noticing comments were disappearing, and the system was explicitly designed to never delete a comment... but by then the 'First Post' game had died down, and the moderation system became highly effective at sending them down to Score:-1 almost immediately.

I stand by the fact that the original iPod sucked. Then they fixed it.

The day I proposed to my wife on the front page.

User #1 here... thanks for clicking on banner ads!