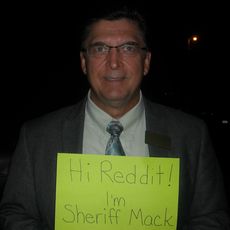 I am Sheriff Richard Mack. I'm challenging SOPA and PCIP Sponsor Lamar Smith (R-TX) to a Primary in a heavily conservative district. AMA

I oppose allowing the President of the United States the power to take our military to war without a formal declaration of war from Congress, so I therefore do not support any of the wars we've been involved in in the Middle East. I do not believe that the US has any authority to appoint itself the police officer of the world.

The Patriot Act was co-authored by Sen. Jon Kyl, and I told him to his face that it was the most unconstitutional law promulgated by Congress in the last 50 years, now only exceeded in it's unconstitutionality of the 2012 NDAA. The attacks of 9/11 did not occur because we lacked a Patriot Act, and destroying the principles of the Fourth Amendment to go after terrorists is a compromise I hope all Americans will oppose.

Having been an undercover narcotics officer, I discovered first hand the futility and failure of the war on drugs. There's two parts to that: First, I do not want our nation's police officers pretending that they should protect us from our own stupidity or appetites. Secondly, we should not be asking officers to risk their lives for such ridiculous reasons.

Having been an undercover narcotics officer, I discovered first hand the futility and failure of the war on drugs. There's two parts to that: First, I do not want our nation's police officers pretending that they should protect us from our own stupidity or appetites. Secondly, we should not be asking officers to risk their lives for such ridiculous reasons.

We should legalize marijuana.

I do not use drugs, and I hope that other people will not use drugs, but I have no right as a police officer to take away someone's liberty because they smoke marijuana. That is absolutely absurd.

I just held a conference in Las Vegas and the local Occupy group asked to meet with me. I told them what I'll tell you. They can occupy anything they like so long as they're not breaking the law. I'll fight and die for their right to peaceably assemble and protest.

What I abhor is some of the ruthless responses from some of our police forces. I detest putting people on their knees and spraying them with pepper spray. I can honestly tell you, as a career law enforcement officer, I've never maced or pepper sprayed anyone in my life.

RE: My "Colbertness"; It feels pretty good, but he's not as funny as I am.

Probably 20 years ago. Government doesn't have the authority to tell me what I can do on the internet or anywhere else. The last thing I want is for the Federal government to control the internet.

I specifically heard about SOPA some two or 3 months ago I thought it was a joke at first.

Thank you for your support. There are plenty of ways to help. We need volunteers, we need people to pound the pavement, we need people to talk with their friends in person and online, and yes, I hate to say this, but money is part of this political campaign. Lamar Smith has raised over $1 million and has received over $400,000 from SOPA supporters.

Any citizen has the right to lobby a representative.

What I have a problem with is the extreme amounts of money that flow to our congressmen. The biggest problem I have is that huge corporations donate to both parties corrupting the system. If our politicians had an ounce of integrity, they would stop that sort of thing. I intend to work towards that.

There certainly is a legitimate place for Federal and State government. It's just that at the county level is where government should be the most responsive to the needs of the people and protecting the rights of the individual.

The First Amendment simply says that Congress "shall make no law respecting an establishment of religion." The entire purpose was to stop the King from forcing his subjects to be members of the Church of England and tithe to the Church. As a believer in the Constitution, I can't support the idea that the intent was to prevent people from practicing their beliefs in any public venue.

That being said, I'm extremely religiously tolerant. I've never been a proponent of things like school prayer, which I don't believe is an integral part of our system.

Yes, I am challenging Smith in the Republican primary. Here in Texas you merely need to show up and ask for the Party primary ballot. Anyone can vote in either party's primary.