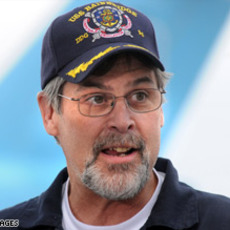 About
was captain of the MV Maersk Alabama at the time it was held hostage by Somali pirates during the cargo ship's hijacking in April 2009.
Reddit AMA Stats
Tag Cloud
sailing, cargo, ship, captain

I am Captain Richard Phillips, whose story inspired the film "Captain Phillips." Ask me almost anything.

I don't think there's enough time here to convince you. It's a suit that is ongoing that started 2 weeks after they got back. It's not all my crew and unfortunately we live in a litigious society. Some of the crew had been on for a while and had never complained until after this incident, so the court will decide and hopefully that will convince you.

Again this has to do with the suit that started shortly after the incident. The 600 miles were advisories and warnings put out by various organizations. But if you look at a chart of our route, we were never outside of 600 miles. And this ship had been in that area for 4 years. So the warnings and advisories were basically if you can avoid the area, to avoid it by 600 miles and we were always in 600 miles. And ships had been taken out 1200 miles before, so the 600 miles was not that accurate.

I think Tom Hanks did a good job in portraying me, again compressing 5 days into 2 hours you lose some things, but I think he did a good job. And how could you go wrong with Tom Hanks???

I have really had no nightmares or dreams from the incident. 2 days after in the movie it shows me crying in the hospital, and the incident actually occurred the 2nd and 3rd night, I would wake up in the night and I had a digital clock so I knew exactly what time it was, and I would be crying, racking and sobbing. And I would mentally slap myself in the head and say "What's your problem? You made it, you're lucky."

And there was this one SEAL who somehow sensed something in me and basically was harassing me, and he explained "Rich, it doesn't always turn out like this." They are not always successful. After some missions, they have to talk to psychologists. So I said "if you leave me alone, I will call him" so I called the SEAL psychologist. And he got a sense of me on the phone talking to him and he asked me if I was sad the pirates died, and I said no doc, no stockholm syndrome here, and then I said put us all back in the boat and we'll see who walks out. And then he asked me if I was sleeping and I said I slept like a baby. And then he asked me if I was eating and I said I was not eating much but because it was hot that was normal for me. And then he asked me if I cried a lot, and I said no but I was waking up at 5 in the morning crying like a little baby. And he said basically it was the hormones and chemicals put out by your body during a fight or flight situation. And he asked me what I did when I woke up crying, and I told him what I am telling all of you, and he said well that is one mechanism to release these chemicals and hormones, crying and talking about it, so he told me the next time it happened to let it run its natural course. For the fourth morning, I woke up at 5 in the morning crying and sobbing like a little baby and I just let it flow for 45 minutes and it ended on its own. And it never happened again after that. And so I truly believe now that it is important to talk to someone who can help you, and to cry.

Ha! That's easy, Tom Hanks would lose. I probably have 25-30 pounds on him, although he is taller. Besides he's a big crybaby.

The story was fairly accurate in the film. We all have to remember it is a movie, and it is compressing 5 days into 2 hours, so some of the scheduling is different, but it follows the true story fairly well. For example, in the real incident it was into the rescue boat and then the life boat, and in the movie, I was directly sent into the life boat to save time.

I don't think most pirates were really forced into this life, it was a choice they made. They do not have the opportunities that we have in the United States, but no, I did not feel any sympathy for them and they felt none for me. In the movie, the actors established a sense of empathy, but in real life, we understood each other but we were adversaries.

There's been a few stories. I've been involved with medical emergencies, fires in the engine room, hurricanes and typhoons, and some incidences of drunken pilots almost damaging my ship. And also I was in the West Coast of Africa during the revolutions that were happening there, with Chuck Taylor and all that, and that was truly a story to experience.

I would say the most frightening experience I've had out at sea would be when I had a fire in the engine room, and I thought I had 4 dead crew on my hands, and had to still calm down a fire that was ablaze in the engine room. So that was my most worrisome and most concerning moment.