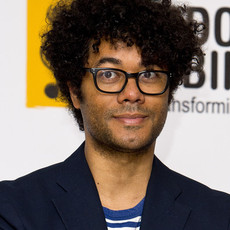 About
Richard Ellef Ayoade is an English comedian, actor, writer, TV presenter and director, best known for his roles as Dean Learner in Garth Marenghi's Darkplace and Maurice Moss in The IT Crowd. He is also a team captain on panel show Was It Something I Said?. He also presents factual show Gadget Man, having taken over from Stephen Fry after series one. He is also a director, having directed films such as Submarine, The Double, which stars Jesse Eisenberg, as well as directing various music videos for well known bands such as Arctic Monkeys, Vampire Weekend, Yeah Yeah Yeahs, and Kasabian. Ayoade often works alongside Noel Fielding, Julian Barratt, Matt Berry and Rich Fulcher in shows such as The Mighty Boosh, Nathan Barley and Noel Fielding's Luxury Comedy.
Reddit AMA Stats
Tag Cloud
comedian, writer, actor, tv-presenter

I am Richard Ayoade, and ask me anything.

I think I last laughed in the mid-90s

as in there's something wrong with me

But yes, every morning.

I'd say it would have to be in the first year I was at university because David was in the 3rd year when John and I arrived. So that must have been 1995? Good gravy.

Despite appearances I'm an animate being

I'm going to be the new drummer in Led Zeppelin

You might think you would, but nothing much has happened to me. It would be more like a screensaver