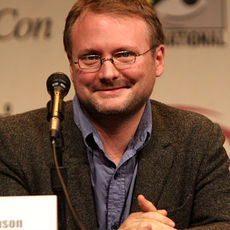 Joe's been a close friend since we made Brick, so it's nice to have that shorthand. But when we're on set together we're both pretty focused, I think that happy sets are ones where everyone feels like they're doing their best work. That happens when everyone knows what you're gunning for. Working with your friends just helps the communication.

That's a really good question, but it's encouraging to see original stuff bust through now and then. Also, I think maybe "original" isn't the real golden egg we should all be after. If you look at Looper for instance you can see the wide range of stuff I drew from, from Terminator to Witness to Akira... "original" is less important than just focusing on telling a story that hits the audience hard.

My alibi is airtight and you'll never break me, ndyjones.

I really should have gone with Blooper.

Thanks so much, really appreciate that. And congrats on your projects!

I wrote Brick when I was just out of college, and basically spent my 20s trying to get it made. We had a producer break down the script, and we said "ok we need X amount to make it." Then we started looking for that amount. And after years and years of failing at that, I met my producer Ram Bergman, who told me I was doing it wrong. I should see how much money I can scrap together right now, and then figure out how to fit my film into that amount. So that's what I did. It wasn't easy but we were able to get it made, we shot it in 19 days on 35mm for about $450k. This is before digital was really an option or at least before it saved you any money.

haha - I'm glad to hear that, I figured I annoyed most people with my David Chen baiting. (Dave is awesome by the way, I just love giving him shit for some reason.) I love so many podcasts, like WTF and Bullseye and The Memory Palace, I don't think I'd come close to doing what those guys go. I'm happy just to listen.

If I spend a year an a half writing a script, the first year will be outlining in notebooks. I really spend as long as I can sketching everything out and working on the structure before I sit down to type out scenes. Just the way I work, definitely not necessarily the best way. At some point in the process I'll go to Staples and get really excited and buy notecards and sharpies, and lay them all out or put them on the wall. It's a nice way to procrastinate for an afternoon but inevitable they just end up sitting there for the next month, and I don't really use them. I find notebooks much easier to work in fluidly.

Very flattering of you to ask, I've got no idea what we're doing next though, I've got to write it. In the meanwhile, keep making your own movies. That's way more important than working on sets.

It's like hugging a rainbow made out of sincere kittens.

6:27pm - fingers falling off, looks like the questions are thinning out. I'll check back in later on and answer any stragglers. Thanks for the great questions guys, this was awesome.

MORE LENS FLARES!!!! They are the cow bell of cinematic language.

I love the way they look, and if they're motivated by a light source that makes sense I just really dig them.

Thanks for the kind words about the camera work - I guess the important thing is that it's always motivated. That's what I get excited about in terms of camera movement, when it perfectly serves the emotion of the moment that's on the screen. Scorsese is the master of this. The things he makes you feel with his camera moves are insane, but they're all focused and to a specific end. People sometimes talk about feeling "the hand behind the camera" with Scorsese, but I totally disagree - his camera work feels so organic to the scenes, I feel much more distanced by subdued but uncreative half-handheld camera work than by any overcranked dolly move in Goodfellas.

Yup - bottle episodes are specifically designed as budget cutters. When I first read the script I wasn't sure what I thought of it - part of me felt what the episode's detractors probably felt, which is "NO! THE WHOLE STORY STOPS FOR AN EPISODE!" But I think what the writers Moira Walley-Becket and Sam Catlin did with that episode is genius, and was just what the show needed at that point in the season. I've got a feeling that even the episode's detractors would feel something missing if the season had cruised by without stopping to dig into that Walt/Jesse dynamic as deeply as that episode did.

It was all there in the writing, I just tried to bring it to life as honestly as possible. But if you read that script, it's all there.

Weirdly, a bigger budget doesn't really change much. Or at least doesn't change what's important. Everything is easier because you have more time and more resources, but you're still using the same basic tools to the same basic end - choosing where the camera goes and working with the actors in front of it to make things feel real. That's the same whether you're making a Bruce Willis movie or a short with your friends.

The momentum of production keeps you from giving up, so it's really the editing and writing phases where things can look bleakest. When you're writing is when the "god should I just drop this" feeling can hit. When you're editing is when the "god this is awful and I've wasted everyone's time and money and will be revealed as a fraud" feeling can hit. So, uh, I guess editing is worse.

I got my start by making Brick for a small budget, basically what we could get our hands on from friends and family. The only advice I can really give is to be persistent, don't give up, and keep watching and making as many movies as you possibly can. Generic and boring I know, but that's honestly what I think counts.