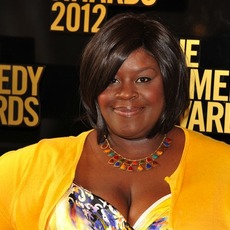 About
Marietta Sirleaf, better known simply as Retta, is an American stand-up comedian and actress, who from 2009 has appeared as Donna Meagle on the NBC comedy series Parks and Recreation.
Reddit AMA Stats
Tag Cloud
comedian, actress, stand-up-comedian

Absolutely not. Jim is the most crass person, dirty-joke telling person I've ever met in my life. Jerry would blanch at anything Jim O'Heir says.

When I graduated from college, I was supposed to go to med school. But I also wanted to be an actor. I did plays in high school and college. And never thought anything of it, until I graduated and was living alone and watching television and thinking "I could do this. I could do this." What I really wanted was a sitcom. So I was talking with a friend who was in medical school, and she said "why don't you do standup? Don't all those standup comics get their own show?" So being in North Carolina, not knowing any better, we assumed that if you did standup, you'd get your own TV show. So that's why I started doing standup. I thought I was going to follow in the path of Roseanne, Tim Allen, Drew Carey, Seinfeld, all those standup comics. I thought I was going to do what they did. So I started doing open mics, and did that for a year, and moved to LA and started doing the college circuit. I'd been kicking around in LA long enough that Allison Jones, the original casting director for our show, called me in to audition. And the rest is history.

Hmm! I'm torn between Crazy Eyes and Tastee. Tastee makes me laugh at every turn, but Crazy Eyes has some depth that I'm dying to get to know about.

Ha ha! I do not. I wish the Benz people would hook a bitch up.

I would have to say Chris Pratt, now that he's all buff and cock diesel.

No, that was pretty much in a category of its own. I nearly died when that happened. And then again when it made it onto the internet.

Again, if I can get Idris Elba on the show, I won't be mad about it.

I would say I'm the closest with Jim O'Heir. We became series regulars at the same time. We share a trailer. And we both gossip like a Brooklyn Jewish mom. But I am also close to Chris Pratt in that I'm obsessed with his baby and I want them to leave him with me every time they leave town.

Nick is very well-read. He is erudite. He is also one of the silliest, goofiest men I've ever met for how smart he is. I've never experienced so many farts with a man who is so well-read.

She can be as awkward as she seems, but I think she does that because she loves to see people's response to it. But she is also a very sweet girl. And I think people would be surprised by that. I probably should not have told you.