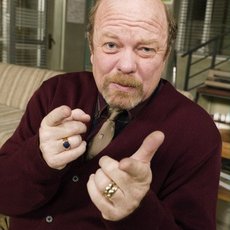 Phil Hendrie here, that guy who hosts a podcast voicing over five characters at once. You might also know me from Rick and Morty, Maron, Futurama, Team America... AMA!

That's a question people ask a lot, and it's a good question, because I've never really been aware of that phenomenon until people started bringing it up to me. The best way to answer that is to say that I have an ability to very realistically mimic human conversation. I know how to take the breath when I should, I know how to insert those awkward, uneven moments when people are thinking about the next thing to say, I know how to drop in and interrupt from the other person, which happens in normal conversation, and so when you put all of that together with a certain level of skill it indeed sounds like a real conversation, and real conversations do overlap. So I think that what you're experiencing is an audio illusion, if you will. Like a visual illusion or something similar.

I believe I would invite a delegation from ISIS to sit in conference with me, and I would have a large-screen TV on at the time with images of American air power repeatedly and unendingly pounding every known ISIS rat-hole into potting soil and pig-feed. And then I would look at those gentlemen and say, "so what do you think?"

Every morning when I awake and the realization washes over me that I have my own wiki page I just wanna roll back into bed and take a few extra moments to pleasure myself.

It's been our new income stream. I think it may very well be the perfect place for the so-called "Phil Hendrie" brand. The kind of offbeat comedy that I do, which has never been something Talk Radio is fully comfortable with, is absolutely a hit on the internet. The only challenge that we have is getting that brand, getting that presence, deep enough into the world wide web to reach lots more people, and that's what we're working on now. But it seems to me that there's a synchronicity here. That the internet came along almost as if to be the perfect platform for my show.

Well I was sued by an NFL player once for basically satirizing a comment he made, by going on the air and calling him a homosexual. And I was sued for a sizable amount of money. Eventually the case was dismissed.

A train trip that I took from LA to Seattle in the spring of 1990 is where I made the decision to commit myself 1000% to the art of radio, and essentially, the artistry of Phil Hendrie. I had really been half assing my art and my career up until that point. And I can remember where I was. I was on the coast of California. The Coast Starlight was the name of the train. I remember staring right into the setting sun and swearing this oath to myself that I was never gonna waste another second on the air.

I would imagine it would be an herbavor, so the animal would simply be fighting defensively, and not needing me for food. And that would simply then mean outlasting the creature, but I'd have to be creative. So let me go out on a limb here and say, given time, and my human intelligence for hiding, perhaps making some primitive noose out of vines, and all of that other Swiss Family Robinson horseshit, I would say a brontosaraus.

Hey, KellyCommaRoy...first off thank you for joining me here...its a good long question so I'll answer it as best I can..our little phrases and pieces of business are indeed taken from TV shows, films or real life experiences. "Apple-tree-ed" sounds like something I simply heard in a movie.."brining lumber" is a sexual/baseball term thats colloquial ...The

Pizza Hut prank was a wrong number, correct..even though we told the chap he was going on a radio show..

We did get the pool finished, used it for 6 years and then sold the house..I miss the hell out of that pool!

The Dylan is dead bit came out of a desire to do something different on the show, and Bobbie seemed to be the right person to try something dramatic with. Since Bobbie is sort of a tragic figure anyway... And then Bud's whole commy god thing is just extracting a little bit of comedy out of the Dylan is dead bit. It was an experiment, which is what you have to do, that I wasn't a big fan of, after the fact. Let me just put it that way.

First and foremost, I don't see them as voices, I see them as characters. So what I'm doing is, I'm forcing the physical instrument to do what I need it to do to create the character. I don't go at it the other way, which might be what you're referring to. I don't try to stretch my voice to see how funny it'll sound. I think of characters and then I use the instrument to create the character. So, in the case of Margaret we're talking about a little bit of my mom, as well as a lot of other females of that generation. And the same is true of Bobbie.

We've got some really, really fascinating things ahead in the world of new media. We have some fascinating things ahead in the world of live performance, that is, stage performance. And um, another episode of New Girl. And we've also written, along with Alex & Chris, a terrific pilot idea. In fact, it answers a question that's often been asked, which is "how do we take Phil Hendrie off the radio and put him on TV."

laughs Oddly enough, my mother was always saying, "that's very nice, dear, but when are you going to be someone like Paul Moyer?" (Paul Moyer was a nightly news anchor here in Los Angeles).

I think my mother felt that was the height of success, being a news anchor in LA. I think my father, truth be told, was a bit envious of me, because I achieved a level of success at a stage of my life where he had not yet, but in all fairness, he was in Italy fighting Germans at a similar age.

From the time I can remember, all I ever wanted to do was be a writer or a disc-jockey, and today I have melded the two into this strange creature known as a radio personality or just voice actor or actor.