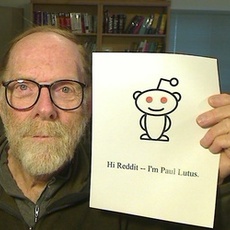 Can you talk about how you wound up working for a NASA contractor without any "credentials"?

I read that a NASA subcontrator wanted someone to design high-efficiency power supplies for the Space Shuttle. So I wrote up a decent design and showed up. There were maybe 20 candidates at the office, all equipped with advanced degrees. But I didn't have a degree, I had a design. They hired me on the spot and sent all the degree holders away. True story.

Also, you worked for Apple in the early days. Do you think consumer gadgets like the iPhone and iPad are good, bad, or irrelevant to the way we interact with technology?

I think they're useful and worthwhile, but I don't like how closed the Apple models are and how little control the user has. That's why I only write for Android (my programs are all free BTW).

... do you do a lot of cooking or baking at your sweet cabin?

I mostly cook in a microwave. I have this idea that, if your diet is completely boring, you won't gain weight. It seems to be working. I call it the "boring diet diet". :)

I was working on the Shuttle in the early 1970s. One Sunday I decided to take a bike ride.

I saw a hot-air balloon in the distance, moving slowly across the landscape, slow enough so I could keep up.

For the next four hours, I pedaled by bike and tried to stay directly under the balloon. It was great fun -- like being in the balloon, but on the ground at the same time. It was a pretty day, with just the slightest wind blowing.

Finally the balloonists decided to land. I jumped off my bike, caught their mooring line, and kept them from drifting into a tree.

It was the most perfect experience.

I started a Planned Parenthood clinic, singlehandedly, in a town whose high school had a 15% pregnancy rate. Of all the things I've been involved in, that was the most fulfilling. Of course, I received endless death threats from the opponents of family planning. The clinic didn't offer abortions, but that didn't matter --- the idea that the local girls would get educated instead of pregnant was deeply offensive to a lot of people.

What are your yearly expenses?

A few years later, I had two airplanes and flew everywhere, but I was finding it hard to adjust (picture of me putting my bike into my plane).

... were there any surprises monetarily how did you plan for them?

Once the Apple Writer royalties started coming in, I decided I would give most of my money away to charity. But the accountants told me I couldn't do that -- you're only allowed to give half your income away, and you have to pay taxes on the remainder, whether or not you gave it away. That was the biggest shock.

So I started a Planned Parenthood clinic -- I funded it personally, in a town where the local high school pregnancy rate was 15%. That was the best money decision I ever made.

First, I didn't work for Apple directly -- I got to know the early Apple crew by visiting and negotiating software deals. But that let to some rather long visits.

I personally found Steve unbearable, and this isn't an uncommon perception. My favorite Steve story happened during the Apple Writer development days --

One day I flew down to California with my bike and two disk copies of a new program I was going to license to Apple (a program that eventually became Apple Writer). On my arrival, Steve Jobs took one disk away for safekeeping, and an Apple executive tried to make a copy of the other.

Then things began to unravel. The executive mixed up the source and destination drives, erasing the second copy. Steve went to lunch and put the first copy on the dashboard of his car. During lunch, the hot California sun baked his copy, and when he got back, the disk had become a shriveled ball. (I have to say that, in all the time I knew Steve, that day was the only time I ever saw him in an apologetic frame of mind.)

I took Steve's copy and tried to think what to do. I finally borrowed a scalpel, cut open the shriveled disk enclosure, and discovered that the media was more temperature-tolerant than its enclosure. I slipped the media into another, unwrinkled enclosure, and the disk became readable.

I thought the above was an interesting comment on the times, but I see it doesn't necessarily reply to your question. I have always thought Steve's infamous behavior resulted from a deep-seated sense of inferiority brought on by originally being in a company where nearly everyone knew what was going on but him.

In the days I was there, people would do what they could to brush past Steve Jobs to get to Steve Wozniak, who most people regarded as the real attraction (myself included). I think this sense of being brushed aside stayed with Steve Jobs his entire life, in spite of his many later accomplishments.

This is just my opinion, but watching Steve trying to manipulate the situations he found himself in was somewhere between disconcerting and entertaining.

The irony of Steve's way of passing is that one of his adversaries from the early days and a friend of mine, Jef Raskin, also died of pancreatic cancer.

BTW I read the Isaacson book also, and I regard it as first-rate.

Also: how did you transition between the two careers of working for NASA then working for Apple?

While working in aerospace, I eventually realized that software was more interesting -- things happened more quickly and the problems were more interesting. I started out writing programs for programmable calculators, including a solar system model that was used by JPL during the Viking Mars Lander mission, and then, when the first Apple II became available, I got hold of one. I thought of it as a hobby until someone called me up and offered $32,000 for a program I had written.

BTW I still write programs, mostly for fun, and, not needing the income, I give them away. Some of them turn out to be useful.

Did you ever feel like your social relationships suffered as a result of your passions?

Many studies have reported that married people live longer, but after a number objections, the researchers went back and re-examined their data. It turns out that married life only seems longer.

No, I'm not married, and there's little future prospect of that (I'm 66). I have to say I would never get away with stuff I do if I were married -- I go to Alaska every summer and photograph bears in their natural habitat.. What woman would put up with that?

I did one of these two years ago. But a lot of people, including the moderators, asked for a repeat performance, primarily because Reddit is so much larger than it was two years ago, and there are people for whom this will be totally new.

However, I do wish you'd find some way to pass on your genes.

In my own defense, I will say that all of them go to a recognized charity, which patches the holes in the knees and delivers them to a deserving underprivileged person!

But seriously, in modern times one's ideas are the equivalent of genes, but often much more powerful and influential. Here's my proof -- do you know the names of Einstein's children? Well, I do -- they're special relativity, general relativity, and the photoelectric effect. They look great together in birthday-party pictures.

I envision your offspring partaking in successful efforts to get our shortsighted species off this rock and into the stars.

As it happens, intelligent people, by which I mean people whose intelligence is out of the ordinary for their own families, tend to have children with average intelligence (average for that family line). It's called "regression to the mean" and it's a well-established effect.

I knew this when I was young, so I decided not to have children -- I decided to have ideas instead.

What made you chose to set up the Planned Parenthood clinic?

I wanted to make a difference, and I quickly realized that almost nothing charitable actually makes a difference. I ended up choosing between saving some trees, and seeing to it that girls got a fair chance to have an education and self-determination. Easy choice.

Was it the first idea that came to mind or did you consider other charities?

I flailed about for years before realizing that most charitable activities are only meant to make the giver feel good about himself, not actually make a difference. You know you're making a difference when people call you at midnight and threaten to kill you.

Truer words were never spoken. The trick is to distinguish schooling from education.

"I have never let my schooling interfere with my education." -- Mark Twain