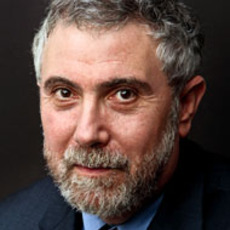 My best theory here is that it's political and sociological: conservative-leaning economists who should know better are driven by peer pressure to suppress their better instincts.

Think about Greg Mankiw and inflation. Early on in the Lesser Depression Greg came out for inflation -- fairly high inflation! -- as the solution, to give us negative real interest rates. But he encountered a firestorm of criticism from his political allies -- and went silent.

The point is that even among academics with tenure and established reputations, there is apparently enough leverage in the hands of the enforcers of right-wing orthodoxy that they end up bowing to the reign of error.

As for Rachman: I think this is a subtler form of peer pressure. And for what it's worth, Ryan Avent has already written the devastating reply to Rachman I haven't had time for because I'm on Reddit!

Let's start with the inflation issue. What we want is "appropriately" low rates -- which in this case means negative in real terms. Excessively low rates can cause problems, but we're nowhere near there right now. And for what it's worth, I don't buy that story about the bubble at all; what went wrong in 2000-2007 was runaway unregulated banks, not too-low rates.

About partisanship: I don't think I'm being partisan, I think I'm being honest. The way many people try to seem nonpartisan is by pretending that bad ideas aren't really bad, which I won't do. It's not partisan to say, for example, that Paul Ryan's budget is a fraud. It's just the uncomfortable truth.

Hmm. I'm not sure about efficiency. But how about the graciousness of life? As someone who spends too much time in airports and train stations, and has been doing that for a long time, let me say that the advent of self-flushing toilets in men's rooms has made life significantly less disgusting.

And on the more serious front: bar codes!!!

Well, if you look at the Congressional Budget Office report from last fall, it shows that about half the rise in income inequality is accounted for by the divergence of the 1 percent from everyone else. That part is NOT about education and returns to skills -- the next 19 have about as much education as the top 1, or if you prefer, hedge fund managers and high school teachers have roughly comparable education levels. So something else is driving at least half the rise in inequality, and probably more.

That doesn't mean that market forces play no role, but it says that it's nowhere close to the whole story, or even most of it -- a point that people like Mankiw refuse to acknowledge.

By all means let's expand access to higher education -- but I'd say that the biggest reason to do that it is not so much to reverse inequality as to stop the ongoing decline in social mobility. Horatio Alger has left the building; it's getting ever harder for Americans born into the lower half of the income distribution to move up. And more aid for college would help make climbing the ladder easier.

Thanks for all the questions, all. It was fun.

We've already done it, by adopting a calendar under which his reign is in the 200s C.E., not the zeroes. I think Bennus Bernankimus, chairman of the SPQR Fed, can do whatever is necessary.

In End This Depression I explain how recessions happen in terms of the true story of a baby-sitting coop; I'm not sure this can explain the issue to a 5-year old, but hey, it's about 5 (and 4, and 3 ...) year olds. And it's pretty simple. If you don't want to buy the book, I've written about it before; just Google "krugman baby sitting".

They really shouldn't have created the euro in the first place -- it was obvious even when Maastricht was signed that Europe didn't have the right preconditions. (I used to joke that they should have signed the treaty not in Maastricht but in Arnhem; it was a bridge too far).

But now that it exists, it would be a political disaster to let it fail. Ideally we would move quickly to true fiscal union. Since that isn't likely, the next best is to raise the inflation target, which would make the process of adjustment to imbalances much easier (Spain wouldn't need deflation, it would just need to lag inflation in the core nations).

It's not an impossible task, but everything depends on whether the European elite will be willing to drop its illusions and stop making everything into a morality play -- and my views on that keep fluctuating.

I don't see how this can work. The adjustment plan, such as it is, calls for Spain to endure years of crushing unemployment and deflation, with no end in sight.

The trouble, as far as I can tell, is that the Germans are so wedded to a view of the way things MUST be that they can't even take on board facts that conflict with this position. Economic crises must be the result of fiscal irresponsibility; tell them that Spain had low debt and a surplus on the eve of crisis and it just goes in one ear and out the other. Ask them how austerity is supposed to work and they give you a sermon on the evils of debt.

If the euro is to be saved, it will probably have to go the brink of collapse first, because until that happens, the Germans and other defenders of orthodoxy just won't listen.

I was clearly too worried about bond vigilantes back in 2003 -- and I've written on my blog conceding that mistake.

I wasn't wrong, however, to condemn the Bush deficits. Deficits serve a useful function when the economy is deeply depressed, and in particular when monetary policy is up against the zero lower bound. You should not gratuitously increase debt in normal times, when any fiscal stimulus can and will be offset by Fed policy.

And don't you wish now that we hadn't run those unfunded wars and tax cuts? The ratio of debt to GDP would be 20 or 25 percentage points lower, and we'd be feeling a lot more relaxed about current deficits.