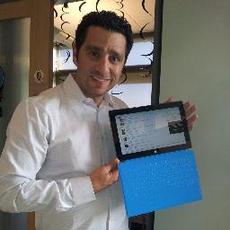 We are Panos Panay and the Surface team at Microsoft. Earlier this week, we introduced Surface 3. AUA!

I am Panos Panay with the Surface Windows 8 Pro Engineering Team AMAA.

IAm Panos Panay, GM of Microsoft Surface, AMAA - Ask Me or My Team Almost Anything

We are Panos Panay and the Surface team at Microsoft. We proudly introduced Surface Pro 3 last week. Ask us anything!

Hi, I’m Panos Panay, Corporate VP of Surface at Microsoft. Ask me Anything!

Like other Windows 8 machines, you can access BIOS settings and turn off secure boot, enabling you to load other OSes.

Get this voted to the top, and you got it.

To quote one of my favorite movies, Tin Cup: "Winner, winner chicken dinner!" DM your details and I'll send you your Surface Pro 3.

Hey, this is StevieB, I manage the Applied Sciences Group that did this research. In some ways some of this technology did make its way into Surface and Windows 8, and in other ways the industry has a ways to go. The demo you are seeing is a research prototype we developed to understand touch and graphics latency. It is meant to ask questions such as what level of latency is perceivable to the user. The research demo does not contain a full engineering solution which is productizable yet.. for example we used a projector that can project at 30Khz.. not really something you can carry around…. However, two things that got tech-transferred into this generation of products.. The first is that we understand the impact of latency on the user experience … the lower the latency of the system, the faster you get your work done.. even 10ms makes a difference. So, one of the things we focused on in Windows 8, was touch latency.. The whole system is tuned to deliver one of the fastest touch to graphical responses… we reduced the latency of all Windows 8 touch controllers to be below 12ms, and Windows 8 optimized the input thread to be the highest priority. The result.. buttery smooth touch input that makes the graphics almost stick to your finger… (just compare Surface side by side to other tablets/phones).. I am super happy on where we have gotten with latency.. Industry leading.. and the beauty is because of research we know how much we should keep going .. Finally the second part which got tech transferred was digitizer tech used in the research demo in that video.. the superfast pressure sensitive digitizer made its way into touchcover, the superfast keys (1khz) on touchcover is how we can do key/tap detection and allow users to home keys without accidentally typing. It is an exciting technology platform here...

That would require extending the design of the accessory spine to include some way to transfer higher current between the peripheral and the main battery. Which we did...

The Windows team is aggressively working on this feature to fix this for all high resolution Windows devices. We don’t have a date yet to share, so sorry. But in the meantime here are some things I do to maximize my external monitor experience..

Hi.. this is StevieB. I anticipated the pen digitizer question.. so I have been thinking about how to talk about it over the weekend. I hope you and other folks find it useful. I will try to answer the rest of your questions preceding. Below is about your Wacom and Pressure question.

There are 3 main types of pen digitizer technologies: Electromagnetic, passive capacitive (those conductive rubber tipped pens that trick the digitizer into looking like a finger), and active capacitive.

Electromagnetic works by putting a printed circuit board across the entire device, typically situated underneath the display and its backlight. This is a completely separate system from the touch digitizer that typically goes in front of the display. The circuit board has a bunch of planar coils that emit an electromagnetic field (like one side of a transformer). The Other side of the transformer is located in the pen itself. As the pen approaches these fields and coils it couples the EM signal and adds a load. This load is picked up across multiple coils and the position of the stylus is then interpolated. These field lines can emit 15mm or so above the display, and thus the mechanism for hover. Data is transmitted from the pen to the device (pressure and button data), by modifying the frequency content of the load. To get orientation there is typically a secondary coil/circuit.. and simple trig can extrapolate the orientation of the pen.. this is important for later to remove mechanical parallax. Among the three this technique has been around the longest.

Passive stylus, works by simply acting as an extension of your finger, by being a conductor to passively couple with the electrostatic signal from the transmit and receive rows and columns of the digitizer. This technique uses the same transparent conductive lines in front of the display to do both the finger and “fake” finger/stylus.

Finally, active capacitive solutions started coming into fruition in the early 2000s. Their mode of operation is to use the same transparent conductive lines as passive stylus does above, but rather the pen tip injects an electrostatic signal which is picked up by these touch capacitive lines. Think of the pen is a mini radio and the sensing lines in front of the display the device are little antennas. The junction(s) (where the rows and columns of the transparent conducting lines cross) which receives the strongest signal is correlated to the position of the pen. To do this, the pen typically needs a battery, but the pen can emit all kinds of signals from buttons, pressure, and other. We purchased a really fantastic active capacitive pen and touch technology a couple years ago: you may remember the company that did the CNN election boards.. Perceptive Pixel. This is no doubt the most fantastic pen technology around for large non-mobile screens. Active capacitive field is defiantly showing a lot of activity by a number of different touch makers.. cause it is a natural extension of touch technology and its integration with the touch solution.

Now let’s go into what makes a great stylus from a hardware perceptive : 1) Precision is king. The more accurate and consistent the pen tip is to the actual ink of the display the more natural and more accurate you as an artist and user are able to execute. a. The Precision problem is broken down into 3 categories: i. Visual Parallax: from pen tip to ink on screen. This is where you think the pen tip is. ii. Electronic parallax: from pen tip to digitizer and where the digester thinks the pen tip actually is.
iii. Digitizer precision and linearity across the entire screen. 2) Feel and sound: should sound and feel like writing on paper. 3) Pen weight, feel, and ergonomics. 4) Consistent and accurate pressure sensitivity 5) Buttons for switching modes (erase, selection, and other commands) 6) Latency: the lag of ink behind the pen tip (highly app dependent)… good developers can keep this number to a minimum. 7) Palm detection so the computer can reject false touches. 8) Device Integration: how it fits, and the industrial design requirements.

Now that we have a bit of a background of the different popular pen digitizer options and the hardware characteristics of what makes a good pen. Let’s go into a brief pros and cons of each of these (I am gonna skip passive stylus as it is still offers an obvious compromise in experience for our current applications [for now]). But before we begin, please let me say first none of these 3 options are generally more superior than one another. It all depends on the application and even more importantly the implementation/execution of technology. The performance of any one of these technologies is highly dependent on how thoughtful, careful, the engineering put into by the device makers to integrate the digitizer system. I have seen some really poor implementations of all 3 of these solutions above by various device makers. Using the brand of technology does not guarantee performance in the least bit.

For sure 1 horse sized surface... put too many of these things together, and they are unstoppable.

Pressure I have heard a few folks worry about the 256 pressure levels vs. 1024... One can claim absurd amounts of resolution 10,12,14,16 bits.. whatever.. but in the end eventhough system is spitting out a 10 or 16 bit number does not mean there is a 10 or 16 bits worth of useful information there.. just like an overspeced digital camera.. the sensor is 20 megapixels.. does not mean the resultant image is 20 megapixels worth of information. You can do this experiment yourself.. I did it over the weekend to try to prove a point to my friends: I took the best known a EM based device I know of and compared it to Pro 3. I started by first downloading and installing a Microsoft PowerTool software called “digiInfo”.. this allows you to record and see Windows messages… I set the software to record pressure on both device. And then a built a small rig to hold the stylus above the digitizer with a about 50 grams downward pressure. Recorded the data of the static pressure.. imported to excel and did some statistics.. here is what I saw: the 1024 pressure tip static-pressure-number had a standard deviation 3 times greater than that of the 256 pressure tip. In end, the performance was the same.. eventhough one had 2 bits less reported info. This makes a lot of sense.. let me put it another way. The Pro 3 pen measures from 10grams-400 grams of pressure and maps 256 levels to that… the mapping is nonlinear.. cause the human hand force activation is non-linear… but one can approximate about 1-1.8 grams per level. The 10 bit pen.. goes from 10-500 grams.. and supposedly does about ~0.4 grams. Think about both those numbers and that is both super super sensitive.. the best weight scale I have can do .1 gram increments…. The only reason it works is cause it averages the heck out of the numbers which adds a considerable amount of lag.. this lag one cannot do on a stylus.. so you are stuck with a nosier signal comparatively in a stylus. With any new stylus there is a difference in the force curve that you have to get used to… and that is likely what people will notice.. not the difference in bit resolution. We are going to make that easier for you by later giving you a piece of software that allows you to map your own force curve! I encourage you to get one of those scales and try to control it to the .1 grams.. will shed some light on the topic. The feedback from artists I have heard.. is that they do not see a difference.. and that is cause really the resultant info is not different.

WinTab: yes we have wintab driver support. See the link below to download and install it for pro3. In the future I hope apps start using the more modern APIs.. Wintab is old and outdated.. adds latency, and inserts itself in the pen path.. http://www.ntrig.com/Content.aspx?Page=Downloads_Drivers select the windows 8.1 option.

DPI You are right for higher DPI screens a number of the older desktop applications are not DPI aware. Things are getting better though. Windows 8.1 supports different scalars nor for different simultaneous monitors.

Retina: Anywhere between 190-300 dpi is a good place to be for tablets.. people hold them closer and you really want to avoid seeing jaggy lines.. but over specing the screen here can be dangerous and we are already seeing people going beyond 300 DPI.. there is not much benefit at all.. and in the end if not done right can cause more harm….I love our screen 100% SRGB and high contrast.. combined with great DPI. Balanced approach.

Home Button Heard some feedback on people pressing by mistake.. we are definitely looking into it.

Hope you find this helpful.. sorry it was a bit long :) StevieB