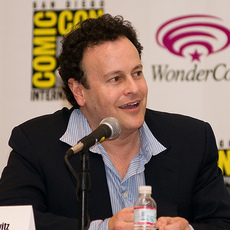 About
is an American television writer and producer. He is best known as the creator of the television sitcom Arrested Development as well as the co-creator of The Ellen Show, and a contributor to The John Larroquette Show and The Golden Girls.
Reddit AMA Stats
Tag Cloud
television-writer, television-producer, arrested-development, golden-girls

I am Mitch Hurwitz, creator of ARRESTED DEVELOPMENT (among other things, including 2 children) - Ask Me Anything!

That's interesting. I guess they are! Who knew? I wonder if they've forgotten? Thanks to you, now I've remembered!

You're welcome! And you know - there is a way around that. You COULD let your hair grow. I'm not suggesting that you change your look, but I think all of us feel like you've had that short hair thing going for a while anyway.

Believe it or not, I don't think there IS one! Because every time I think of something that's too outlandish, I end up trying to find a way to use it. I remember pitching Buster loses his hand as a bad example to motivate the writers to think outside the box...and then a moment later, I thought "Hey, why don't we have Buster lose his hand?"

Yea, there were a lot of things that her name was made out of - Anvil was definitely part of it. The image of a veal padding pen. And there's an old Monty Python skit where John Cleese's character's name is "An Elk" - it was an oblique reference to that too. Her original name was "Fugly." We were going to name her something Fugly - and then it felt a little too jokey and they fortunately didn't allow us to say it.

I think I would not want to be Mark - I always wanted there to be a 5th Bluth sibling that didn't give his permission to be in the show. And it was an ambition that I had from the very start. And I realized during the pilot that I'd blown it, because all the family pictures should have 5 people in them with one blurred. This was the joke that I ended up doing with Andy Richter. The joke was going to be that his name was Mark - in one version of the joke, the reason that he didn't want to be on the show was because he had a giant red wine birthmark all over his face - and suddenly it didn't seem as noble that he didn't want to be in the show. But it was very clear that I missed that opportunity early on.

Who would I want to be? I guess I'd want to be Tobias, because he's the most oblivious and the happiest. And he's the dreamer. And he doesn't know how unrealistic his dreams are, so he's happy.

Here's the thing: I don't know what nobody seems to get. I mean, sometimes I think that nobody has noticed something, and then I'll hear that someone does. My older brother was over yesterday, and he was pointing out all these really subtle things that I didn't think anybody would notice. And some of the stuff may be well-known now - my favorite joke is who the real George Maharis is - because that's a punchline we didn't finish. Basically the joke is, he doesn't want to be George Michael, because George Michael had sex in a public men's room, and he doesn't want to be Boy George, because Boy George had sex in a public men's room, so he settles on the name George Maharis... but a little research will show that name has a similar fate. That being said, I think the groupthink on reddit has caught all the jokes that we've layered in - except for the ones we haven't finished yet, which are setting up for a future story.

I've had other object lessons that I've worked hard to teach them. Fortunately, I have a friend who strangles small animals and I've been able to use him successfully to remind them to wear their retainers, etc.

We are really working on it, actually! It's tricky because 20th doesn't really have a record label, which a lot of the other studios do, so they don't have a mechanism in place, but all of David's music is so great and I really want to get it out there.

There are a few things going on there, and I never think it's appropriate for an author to comment on the symbolism in his work. But one of the things I liked, truly on a superficial level, is that it's a truly funny bird. It's a mean chicken the size of a man, and it's an ungainly creature that can't seem to gain flight. So there's a lot in there.