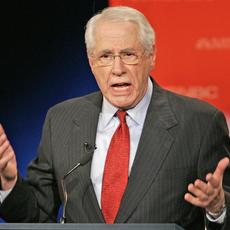 About
is a former Democratic United States Senator from Alaska, who served two terms from 1969 to 1981, and a former candidate in the 2008 presidential election.
Reddit AMA Stats
Tag Cloud
politician, senator

I Am A former United States Senator who ran for President in 2008. AMA.

"You can tell them it was never really about winning. Did I think I could make big changes, shake things up a bit if I won, of course? But I'd still have to deal with a Congress that wouldn't approve of me or my policies. Congress would've been all about politics as usual.

I ran, at first, to spread information about my National Initiative for Democracy. My whole campaign wasn't about getting me power. It was about giving you power. So did I think I could win? Well, we had a good showing after the first debates. People reacted really well to us. But it wasn't about winning. It was about getting a message out there. It was about changing the dialogue. Votes for me were a vote against the status quo, and someone out there had to bring truth to power.

If I had won, you better believe things would've changed."

"That's a lot of questions. With Wikileaks, we're seeing something remarkable. We're seeing technology, the Internet, changing the face of public policy itself. I mean, what is the Internet? It's the most Democratic thing around. It's a forum where everyone is based on the merit of their arguments. Everyone is on equal footing. So with Wikileaks, you have a portal that openly questions government and gives dissenting citizens a place to question that very government. It's amazing. I wish we had it 40 years ago. I don't think that the very same Governments will let it exist for much longer, but I think it's very very valuable. Leaks don't take months and years anymore. They take a little courage, a little questioning, a little patriotism, and a high speed internet connection.

Ralph is a dear friend. I love Ralph. I think he's done what needs to be done in offering an alternative to the two parties. He wrote the intro to my book, as you well know. The new release of Citizen Power.

Sarah Palin? She warrants a discussion all to her own. But Sarah is pretty brilliant in what she does. She's good at painting herself as a hometown maverick. I wrote something on the website last year. [You can see that here]

Nobody has the bravery these days. Everyone is too worried about being re-elected. Nobody wants to be a thorn in the side of politics as usual."

It was a really terrific campaign. I've worked on large campaigns since, but nothing quite has the feel of Senator Gravel's.

I think it was because we got a lot of phone calls like yours at our office; we had dozens of calls and e-mails coming in that pleaded for Senator Gravel to stay in the race, to keep up the fight, because he was the only candidate bringing truth to power and the only candidate with whom they completely or largely agreed with.

"That's a good one. We got banned from the debates that GE, well, NBC were having because we didn't raise enough money. Now, this is important. NBC is owned by GE, which has a stake and claim within the Military Industrial Complex. They were able to silence me, someone who was proudly rallying against this country's militarism, and marginalized me. It was also absurd that money was the reason someone would be banned from the debates. It shows that politics at the presidential level isn't about one's positions, but all about the money. It's ridiculous. How could you raise money without being on TV? On top of that, they never gave me any time to speak at the debates. They were scared of me."

I suppose that title is kind of misleading, isn't it?

Mike wanted to do an AMA, but he's in the middle of a move and hasn't been on a computer as much as he'd like. If you post your questions here, I can have him come and answer them sometime soon? Or we can scratch this whole attempt and I can have him do it live.

To clarify, I am not Senator Gravel.

[Mike's talking about his National Initiative for Democracy: http://www.ni4d.us]

"A lot of my staff was really young. The future of politics, because of things like the Internet, is with your generation. I mean, we see this because I'm having a dialogue on the Internet. Your generation gets that much better than mine.

I tell you, avoid city government. Most city governments are part-time and they're not political jobs; the public policy at the city level is about police, parks, and plowing. Run for the State House. I did, and it launched my political career. State politics is wonderful because you get a taste of what meaningful lawmaking is all about. You cut your teeth and help your constituents, simultaneously. And you can really shake things up at a statewide level. And hey, if I like where you are on things, I'm always willing to endorse."

I can answer that one:

Senator Gravel respected Congressman Paul and the voice he was bringing into the campaign in 2008. They met in Dr. Paul's Congressional Office once, I believe, and we ran into Paul and his staff a couple of times in New Hampshire.

That said, I don't think that Senator Gravel and Dr. Paul were ever interested in being running mates. Mike ran to promote his National Initiative for Democracy (http://www.ni4d.us) whereas Paul was running on a message of small government. The two ideas didn't necessarily mesh perfectly together.

Mike did go onto run for the Libertarian nomination for President, much as Paul had done early in his political career, and the two men have a lot in common. In my opinion, however, they're more valuable to the country as separate entities.

On Senator Gravel's campaign for President, I was largely in charge of the new media stuff. I produced a lot of the videos we released on the internet, and those I didn't produce, I was in charge of promoting. Near the campaign's end I did a lot of managerial stuff because the scope of the campaign has changed: that included press releases, delegate coordination, standard stuff.

Senator Gravel wasn't in the Senate when he ran for POTUS; he served during the 1970s and gained notoriety for reading the Pentagon Papers into the public record. That said, I've also worked in government (though never for a US Senator) and I know that in the office where I worked, email, not phone calls, were the best way to reach us. I'd forward important e-mails to the representative for whom I worked, though he rarely wanted phone calls to come his way. I really think e-mail (and an organized system for receiving it) is key.

"You know, I spent some time in South Korea working on an initiative system for that country. It's a great place. I met some of the most talented intellectuals I've ever had the pleasure of spending time with in that country.

It's a safe place. North Korea is doing what North Korea has always done. North Korean threats of invasion are old news for residents of the Republic of Korea. Your sister is safe, so long as the United States doesn't try to police the world.

I have nothing but thanks for your sister and your family for her service."