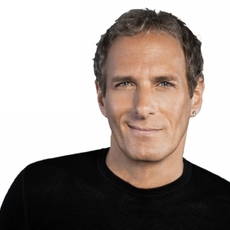 bring it on! that movie is hilarious...but I'm still the real Michael Bolton!

give me some mo samoas

Thanks for this - video response coming shortly!

EDIT: Here's one more behind the scenes story I had to share which you can watch here

Hey Shannon, I remember meeting you, and thanks again for making the drive to the book signing that night. As you know, VAWA just got reauthorized and we can never take it for granted -- it's really fortunate it passed by such a great majority. This Friday I'm joining an organization called Breakthrough, to help launch their global campaign - "One Million Men, One Million Promises" calling on men around the world to promise to take concrete action to help end violence against women.

Everything from Coldplay to Enrico Caruso, Rihanna, Kelly Clarkson, Marvin Gaye, Ray Charles and Stevie Wonder...but I play them all at the same time! I'm not locked into one particular genre of music and am grateful for that.

It's a funny film. I sign a lot of the DVDs for fans. I'm glad I'm secure enough in writing, producing and grammys that that's one of the things people want to do. I sign them "the real Michael Bolton" - Hoping they would do an Office Space 2 and have me in it.

The funny thing is I'm kind of playing around with this idea of a rock record. Randy Jackson has been trying to talk me into cutting one for about 6 years now. He was playing bass with Journey when I first met him, and he played on a bunch of my early recordings. That rock record just might happen.

It's a question I'm surprised I haven't had to answer more. I address it fully in my book. It's a good question. The irony is, the injustice that took place was so horrible, was such a miscarriage, because it was about a song that my co-writer and I could have never heard if we wanted to. We could have never found it. In fact, there was a search to see whether it could have been found and copied and it was the equivalent of someone coming along saying we have a picture of one of your children claiming it belongs to one of them, and the court giving the child to one of them. Creatively. Cause thats how our songs are to us.

For instance, we had one of the most successful writers in Motown history come in to testify on behalf of my collaborator and I, that they had never heard of this Isley song that we supposedly infringed. And that person produced the Isley's and he'd never heard of that song - so that was part of our evidence of how unknown and undisseminated the song was.

After a certain amount of success, you don't accept tapes or CDs because someone can come up to you and claim they gave you that song - so people say don't accept unsolicited material. In the world we're in now, it's almost impossible for someone not to be able to connect you to a chain or site where they can claim their music was.

It teaches you about the justice system and when it fails how bad it is. How devastated it is when logic and reason are not brought to use. But, on the other hand, we now live in a time when it'll be almost impossible to defend ownership of original material and intellectual property because of what didn't exist during that case, which is the internet. The internet is an enormous place of music, lyrics, etc. It'll be impossible to say you didn't have access to someone else's ideas because the dissemination is nearly infinite now.

Now someone would be able to say, oh you mean you've never been on youtube? There's the access, by being on youtube, anywhere where there is a tremendous amount of music, you can't say you didn't have access to someone else's work. Whether it's a speech or author or composer, it's impossible to live in our time without being potentially exposed to someone elses creation, which has already changed how intellectual property is protected and will be in the future.

I don't consider myself a cinephile but I love film, and because I tour so much I spend a lot of time on planes so I watch a lot of movies. Singapore is a 4-film flight.