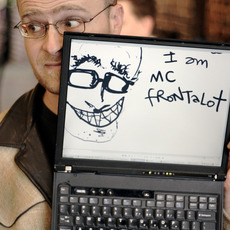 I am MC Frontalot, that rapper who made up 'nerdcore' almost 20 years ago. My new album finally came out! Ask me anything.

reddit user passionlessDrone posted these in the original request:

1) Describe the first time you realized you were a nerd and were proud of it?

When I was young, being nerdy was much more of a shame point. But I was proud in my extreme reflexive arrogance -- I decided I was a thousand times smarter than the kids who picked on me and that some day I would invent a way for them to SUFFER. I walked around kind of thinking I was Lex Luthor and one day I'd show 'em. Not really an epiphany moment. More like: all of third grade.

2) Clearly you know someone with Aspergers. Can you describe your approach to that song?

I wanted to make a song where people without Aspergers would parse the emotional tone of the chorus and think that it was making fun of aspies and than anyone who actually had Aspergers would maybe ignore that and listen to the actual presentation of the story, which is the opposite of making fun. I thought it might be revealing somehow to generate those two opposing responses on first listen, and have the aspies be the ones getting it right. I don't know how well I pulled that off, but some people have told me it works pretty well. The story's not about anyone specific, just a little piece of fiction about a kid who's too distracted by a decoration to make a connection with someone he likes.

3) How did you get Wyatt Cynac to participate on your album?

Emailed him! He was extremely kind about it.

4) Have you humped a goth girl yet?

Never once. Though non-goth girls occasionally cosplay as actual goth girls in an attempt to TRICK ME.

5) Is there a number of Stellas at which they are no longer crisp?

A crispy Stella is simply one that is served hell of cold. I think! Onstad might correct me there. So the theoretical limit to the crispy Stella supply would be: one more than the number that would fit in the world's existing refrigeration containers. (Stellas chilled naturally outdoors are of course not 'crispy' but rather 'crunchy.')

It is a good question. And it is a strange and difficult balancing act. Most of us like making songs that are funny or have funny aspects, but none of us (well, none of us who you mention nor any of the other nerd rappers who are any good) think of our songs as joke songs or our acts as comedy acts. We make music songs! We just happen to be fucking hilarious people! If you're as old as me 'n chris 'n schaffer, you might remember when a lot of hip-hop had a sense of humor. Public Enemy was pure politics but Flav got to keep it hilarious in every intro. NWA came hard like a granite countertop but they have jokes in every single verse. So I want to think of myself as a traditional MC and not a novelty MC.

So why do I put something that sounds ridiculous like 'nerdcore' in front of my music? Why do I call myself 'Frontalot,' a name that no self-respecting rapper would ever touch? There's two reasons. First, I feel like I should wear my self-loathing on my sleeve since if you bury it deep under the pretense of thinking you're god's gift to music listeners, it ends up bubbling out every so often and then you're beating up Rhianna or peeing on a groupie on video or whatever miserable shit popstars always end up doing. Second: I always liked the idea of a culled audience. I figure I can tempt them in with something that seems like it's worth about ten seconds of your attention (nerd rap? that's probably dumb but I will click it.) and then IF you are part of my natural audience, you will almost immediately see that there's something interesting going on. And every time your expectations get topped, you get excited. The folks who don't grok will wander off, and good for them, and who cares about them anyhow. I work hard on these songs. I like it when every single person in the crowd understands them already and finds them a little bit meaningful.

Back has actually been in better shape most of the time since that first tour (the one in the movie that features me whining and groaning about my back). I think I eventually learned to do some damn stretches before and after going onstage, and to simply BE THAT ASSHOLE who always has an important incoming phone call when heavy things need to get lifted nearby.

Of course the headlamp is effective against grues. You think it's just to keep my luxurious hair from getting in my eyes?

I like that so many people have been trying to parse out a 'correct' answer to the end of this song. It occurred to me when I got done writing it that you could read it either way and that your reading might tell you whether you have a BEAUTIFUL AND MAGICAL SOUL or are someone who believes that WONDERMENT IS DEAD IN THIS WORLD. I always thought of it this way: the thief takes possession; at that moment he's wishing he wouldn't get caught; that's the wish he gets; thus, even though he's seen taking it, his observers are powerless to catch him. And he's squandered his one true wish. And I don't get mine because I thought about it too much.

My dear friend MC Lars has worked with them! And of course they're great. But I am not so much a Ska guy, myself. Still, if they wanted to do something together I'm certain we could figure out a very pleasing mixture of our various weird music ideas.

I have definitely had a few folks come up and say they got to the rest of the catalog by hearing the TP Factory rap first. I think it would be a little bit hard to figure out who I am if all you had was that DVD.

Cam footage or it didn't happen.